Phil walked 3.5 miles with 1310 ft of ascent
(Vehicle used to get between Youth Centre St John's in the Vale CP to Parkgate CP Near Dockray) 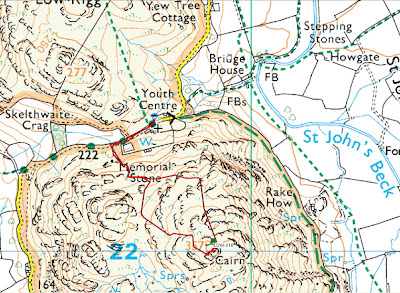 Saturday and the second day of our long weekend in Keswick. It was pouring rain and with Sunday forecast to be the better day Judy decided she would join me for a longer walk then and go into Keswick to look around the shops and visit Bryson's Cafe on the Saturday. I decided to study the map and came up with a plan to do two "easy" Wainwrights near to the town.  These were High Rigg LDW-210 and Gowbarrow Fell LDW-181. They were a good distance apart so the car was used in between and I climbed the fells and returned back to the car by a similar route each time. This was going to be quick and easy and if I got wet through there wasn't a problem of suffering all day in wet clothing, which actually happened the following day when we went further south!
For High Rigg I parked at the Youth Centre in St John's in the Vale (gated road) and it took 12 minutes to reach the well screened summit.  The rain relented while I set up the VX-170 and several CQ calls produced nothing until M0WCR Mark from near Workington responded to make my walk up to High Rigg worthwhile with a qualified activation.  This was a close run thing and if there is one summit you are likely to fail on using 2m FM for WOTA then this is probably it. So the summit was qualified for WOTA but sadly not for SOTA (LD-044) as four contacts are necessary for that scheme. After another 15 minutes of fruitless calling I gave up and returned to the car having spent 30 minutes on the summit. 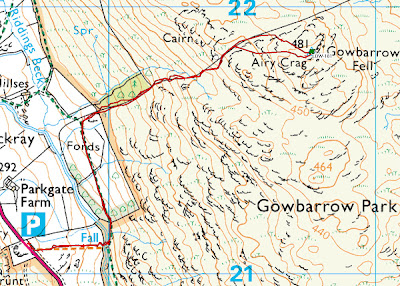 Gowbarrow Fell was my next target before I went back to Keswick for some lunch. I drove south of Dockray and parked up near to Parkgate Farm (free) NY 397211. On my way there with the rain pouring down and the lanes flooded around Matterdale End a VW Golf had come to grief and was resting on top of a dry stone wall.  It appeared that as the car had gone downhill that the driver had not made the corner and had slid off the road on wet leaves. I stopped to check because the accident looked recent.  The interior light was on in the car but there was no one about, so I continued on my way. The vehicle was still there after the activation when I returned 90 minutes later, still with no one about and the interior light turned on.  This must be a nasty piece of road as the last time I had used it the previous March a van had also left the road near to the Parkgate Farm Car park.
I was parked and walking by 11.00am and decided to be brave by throwing my rucksack across the waterfall at 400211 despite there being a fair amount of water coming down it.  I followed my rucksack and made a good landing on the smoothe rocks - no problem as I continued on my way to the top of LDW-181, which was reached in 30 minutes.  This summit was higher by 400' and less screened to Penrith than High Rigg with Geoff G4WHA and John G0TDM quickly logged,  followed by G1OHH Sue in Lancaster. This contact provided a pleasant surprise with the signals passing straight over the top of the much higher Place Fell and Cauldale Moor (Stony Cove Pike).
Job done I succesfully negotiated the waterfall once more and was back at my car 90 minutes after leaving it, with another summit activation completed in the Eastern Fells.