Wainwrights on the Air (WOTA) by Phil G4OBK

(Article from Summits Base News June 2010)
Interest in WOTA is gathering momentum with several new activators and chasers registering for the scheme in 2010.
First – a bit about the great man, who as a fellwalker, writer, artist and poet produced many books in addition to the seven pictorial guides, and in addition was featured in several TV documentaries. In 1973 AW conceived the Coast to Coast Walk. We only got to know him as an old man as he preferred to keep out of the limelight until the latter part of his life, when he came into contact with the professional photographer Derry Brabbs and the TV presenter Eric Robson. I find him an intriguing character, a selfish obsessive scheming man, who also had a soft side with a dry sense of humour which comes out from time to time in his books.
Born in 1907 to a working class background in Blackburn with a drunken father and a hard working mother, AW received a good education and was well read, eventually becoming the Borough Treasurer of Kendal – a place he moved to just before the Second World War. He first walked in the Lake District almost 80 years to the day I write this piece, on June 7th 1930 when he accompanied his cousin Eric Beardsall on a walk from Windermere up to Orrest Head (781ft), his first summit. The following day they set out from Grasmere to climb Helvellyn in pouring rain and then walked into Keswick where they found a B&B. The awful weather on that day failed to put Alf off and he went on to become the master fellwalker of all time.
In 2008 my XYL’s elderly parents gave me a set of the pictorial guides, all priced at 12/6 and purchased in the 1960’s when they walked the Lakeland Fells on a regular basis with my XYL. Unfortunately they aren’t first editions - these are now worth between £200 and £500 each depending on the condition. I remember seeing the books as a schoolboy in the local library.
In 2009 when Julian Moss G4ILO came up with the WOTA scheme I became interested and decided that, despite living around 100 miles from the nearest of the 214 Wainwright Fells, I would take on the challenge of climbing them all and make contacts on Ham Radio using the WOTA award scheme. I reckon this will take me three years. The project has set back my attempt to become a SOTA Mountain Goat – that will probably happen around 2015 at the rate I am gaining SOTA points these days. The added benefit as you tick off the Wainwrights is that you also cover many SOTA summits at the same time. The 214 Wainwrights were not chosen for their prominence - AW chose them simply for the view from the top. Many of the Wainwrights, especially in the Far Eastern section, are close together. Indeed, if lightweight 2m gear is used, four can be activated in less than 90 minutes in the case of Kidsty Pike, Rampsgill Head, The Knott and Rest Dodd. Only one simplex contact is needed from each to qualify the summit, however it is commonplace with simple FM gear to make several more QSOs than that.
WOTA for me is not about driving as near as you can to the summit and then climbing it. It is about planning a walk within your own and your companion’s capabilities to take in as many summits as possible and then going out and doing it. Most of my activations have been done with friends, family or with a walking group so it is unreasonable to spend a lot of time setting up equipment on the summit, turning a beam, listening for long periods and generally making adjustments. I need to be on the air, contacts completed and on the move again within 15 minutes at most.
So how popular is the scheme and what do you need to take part as an activator or chaser?
Active participants of the scheme both chasers and activators, tend to live in the north of the country, especially the North West. Most activity takes place on 2m FM on Wainwrights, however if a Wainwright also happens to be a SOTA Summit then it is more likely that the activator will use 2m SSB and probably HF as well. If we discount the people who have only made a few contacts, there are currently around 18 activators and 25 chasers.
So why not try it – if you are doing SOTA and you happen to be either activating or chasing then check out the WOTA website. The registration process is straightforward so start entering your contacts. If you intend doing a SOTA take a look at the hill bagging website (link below) and see if you are passing over or close to any Wainwrights. Just call CQ WOTA on 2m FM with a vertical antenna (rubber duck is not advisable – use a quarter wave whip at least) and you will be well received. The top chasers are the ones who live close in to the action – the current leader with 115 points is Sue G1OHH in Lancaster who is battling it out against the two Penrith stations of John G0TDM on 112 points and Geoff G4WHA on 110 points. The station of Mike G4BLH near Burnley, some considerable distance away from the Lake District, is lying in 5th place with 70 points and you also have the Lake District fringe stations of Doug G1KLZ in Ingleton on 79 points and Dave G6LKB in Ulverston on 68 points.
The most prolific activators are Phil G4OBK, Richard G1JTD, Geoff G4WHA, Bob M3XJV and Rick M0RCP.


Various awards exist for a nominal charge and there are many more details on the WOTA site run by G4ILO, where your contacts can be entered into a database.
Last week I completed over half of Wainwrights Coast to Coast Walk and in the process successfully activated 12 WOTA summits which included 3 SOTA summits. In addition I covered the summits of G/LD-045 and Nine Standards Rigg G/NP-018 also for SOTA. It was great fun in really good weather. 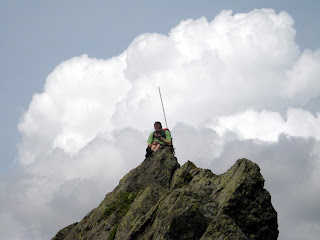 The picture to the left is of me activating from the top of The Howitzer on Helm Crag LDW-201 (also known as the Lion and the Lamb) from where I worked G1OHH, G4BLH, G4ZRP, G4VKE/M, G1KLZ and G0VOF/P using 5 watts to a rucksack special half wave vertical. Exciting it was and quite difficult to ascend with a rucksack on my back. The high spot of the trip was operating from Angletarn Pikes which was the last one of 36 activated in the Far Eastern Fells.
I hope this article will encourage more readers of the Summits Base News to give WOTA a go.