Phil Judy and Treacle walked 6 miles and climbed 840 ft
A weeks stay in a cottage in Hall Dunnerdale, south of the Hard Knott Pass in the Duddon Valley was booked. We chose the location as there was reasonable access from there to the Coniston Fells and Langdale. Our cottage was hired from Cottages4U, who give Wainwright Society Members a discount. We had considered staying at the New Dungeon Gill Hotel for five days but decided that we ought to take our terrier Treacle on the holiday rather than put her into kennels. She enjoys doing the Wainwrights, having bagged over 50 so far! 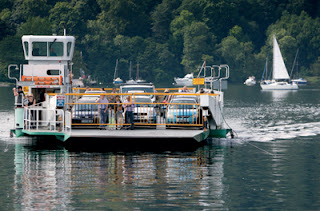 ﻿﻿Our route from Pickering took us to southern Lakeland through Kendal and then on to the Windermere Ferry south of Bowness. For the first time (for me at least) I had decided to use the ferry run by Cumbria County Council.  There has been a ferry operating here taking traffic across to Far Sawrey for over 500 years. "Mallard" is more like a floating bridge than a boat which can handle up to 18 cars and over 100 passengers at one time. The crossing was fast and efficient on the day we used it and there is no doubt the service helps to reduce congestion on the roads around the lake.  The cost of crossing including passengers is £4 single (July 2010).
Judy (XYL), Treacle and I arrived in Southern Lakeland on Saturday July 3rd and planned to do a walk taking in two easy Wainwrights above Elterwater. The first was Loughrigg Fell, which is also a counter for SOTA (LD-047) and is LDW-211 for WOTA. We followed this up with Silver Howe LDW-202. Both fells are relatively low compared to others in the area but offer an outstanding viewpoint in all directions.

We arrived at Elterwater around 1200z on a sunny July Saturday. You can imagine how difficult the parking was. We are NT members and their car park was full. All free parking spaces in the village were also taken so we retreated away from civilisation back to the main road to find an empty lay-by at 333048. We were walking at 1217z and on Loughrigg Fell at 1300z where we enjoyed our lunch, before getting out the 2m handheld and J Pole antenna. The route taken from Elterwater to the top of Loughrigg was a mix of country lanes and paths.
The first station worked was Brian G4ZRP on the Wirral. We made four QSOs before leaving the fell at 1336z but they are all worthy of mention. My signals got over the high fells to Annan where Geoff GM4WHA was listening, this was followed by a SOTA summit to summit QSO with Rob GD4RQJ/P on South Barrule GD-003. The last contact was with Bill G4USW in South Lakeland.
During our week in the southern lakes we found several notices like this one, and spoke to one of the National Park Wardens about them. They relate to the National Park and Ordnance Survey finally getting their heads together to provide more accurate mapping of public rights of way in the district.  I hope they are successful. We also found several more of these notices around the Coniston Fells later during our week in the area.
After losing most of the height gained on the descent and came down to the road at 340053, we circled around High Close Youth Hostel, leaving the lane just after it to make our way over Grasmere Common to the top of Silver How. Many paths cross the common here, the top of which is grass and bracken. It was a 2.5 mile walk from the top of Loughrigg Fell. We reached the summit of Silver How at 1504z. Again, only four contacts were made with Sue G1OHH in Lancaster appearing, G4ZRP and G4USW again, and finally G1KLZ/M (Doug from Ingleton) who was out in his vehicle.
We helped a German girl get off the fell and back to Grasmere - she seemed to have lost her sense of direction despite the fact that you could just see the village from the top. Silver How drops away very steeply down to Grasmere Lake - NOT RECOMMENDED as a way down, which is what she was considering, so the girl walked with us the same way we came up and then turned off left at a path junction to follow a grassy path safely back to Grasmere Lake and then village. We made our way down Raven Gill via 32270 05770. No public path is shown here on the OS map, however the route used is steep yet safe and comes out near Chapel Stile at 32260 05545. I don't know this part of the Lakes too well, although Judy had been here years ago. We chose a longer route back through Chapel Stile, on our way at  322052 we passed the appropriately named Wainwright's Inn. What would the great man thought of that I wonder? Prior to the pub we came across a village shop where we purchased ice cream and a few groceries.  Once past the pub we followed Great Langdale Beck along on the footpath below the quarry. This brought us to the pub in Elterwater village and then on to the car, sat on its own in the now empty lay-by.
Our first trip (of several during the week) by car over the Wrynose Pass followed. We turned left before the Hard Knott Pass at the Cockley Beck junction to head for Hall Dunnerdale where the cottage was located. It was a good start to the week in perfect weather for fell walking, and we had another two Wainwrights in the bag.
Posted by Phil G4OBK at 23:59