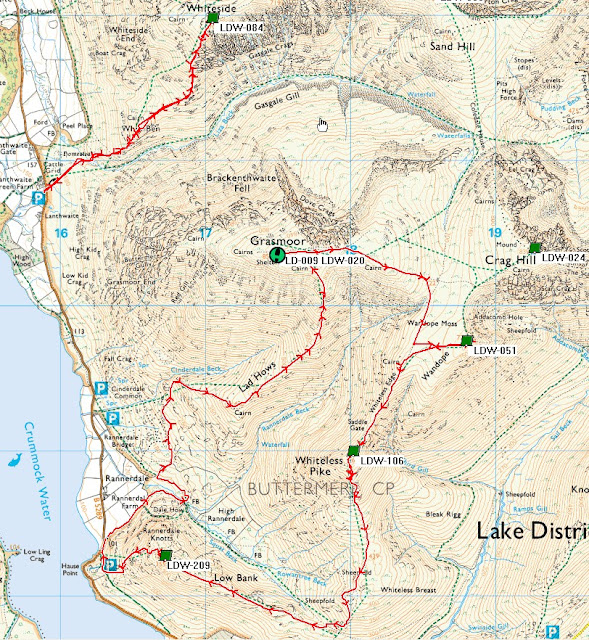 ﻿﻿
This was the day when we met up with Derek 2E0MIX in the saddle between the summits of Grasmoor and Wandope on what was a day of two walks. In retrospect we may have been better off climbing Whiteside by crossing Gasgale Gill after bagging Grasmoor - instead we did the circular walk finishing with the lowly Rannerdale Knotts before driving the short distance to the car park at Lanthwaite Green Farm where we tackled the formidable Whiteside LDW-084 as a walk in its own right.
﻿﻿﻿After driving from Keswick we left the small car park near Hause Point by the side of Crummock Water at 0840z and soon encountered several groups of male and family Army Cadets coming down off Grasmoor - they must have started before 0700z. They told us that they were heading back to Crummock Water for a dinghy exercise next. We added extra mileage by using the footbridge at Dale Howe - not necessary.  I should have looked at the map, the beck can be easily forded at NY 1666 1875.
﻿﻿﻿
﻿﻿

The path then heads north over Lad Howes and gets steeper after that. An unrelenting climb follows and we reached the Grasmoor shelters at 1020z after 2.5 miles walking and 2500 feet of climbing! It would have been easier had I visited this summit from the east when I completed Walk 35 The ColedaleHorseshoe in 2010. Grasmoor is SOTA LD-009 and LDW-020 for WOTA and in my opinion is not a very pretty mountain. At an height of 2795' the take off was excellent and 22 contacts were completed on VHF with summit to summit contacts with Scotland and Wales. We left the summit at 1055 after contacting Derek 2E0MIX/P who was heading towards us from the Wandope direction, which is where we headed next.  ﻿﻿

﻿We met up below Crag Hill and went a tad far south whilst chatting to Derek before retreating up to the cairn on Wandope LDW-051 where I completed 14 contacts including talking to Terry G0VWP/P who was on Muncaster Fell LD-055 and GW4UPO/M in his car on The Great Orme - not counted for SOTA as you need to be people powered on the summit to qualify.
﻿Geoff and I bid our farewells to Derek who was continuing with his own activation and made off downhill to Whiteless Pike LDW-106, finishing this leg of our walk with LDW-209 Rannerdale Knotts from which we had an excellent view down Crummock Water when we arrived at 1350z. Contacts from here were mainly local however I was delighted to exchange reports with Colin G4UXH in Milnthorpe and surprisingly with Robin GM7PKT/P on SOTA CS-017 Meall Ghaordaidh. This mountain is a Munro North West of Killin in Central Scotland.
﻿

﻿Returning to my the car we drove 3 miles north and started our walk up Whiteside LDW-084 at 1440z. It took us exactly one hour to reach the summit and take shelter behind some rocks. This was a steep walk on a shaley surface and we covered 1.25 miles with 1800 ft of ascent to reach the top. The WOTA activation generated only seven contacts and we left the summit within 10 minutes to follow the same route back down to the car.  I was gratified to have made 67 contacts from the five Wainwrights climbed in the day as we made our way back to Keswick for our dinner.