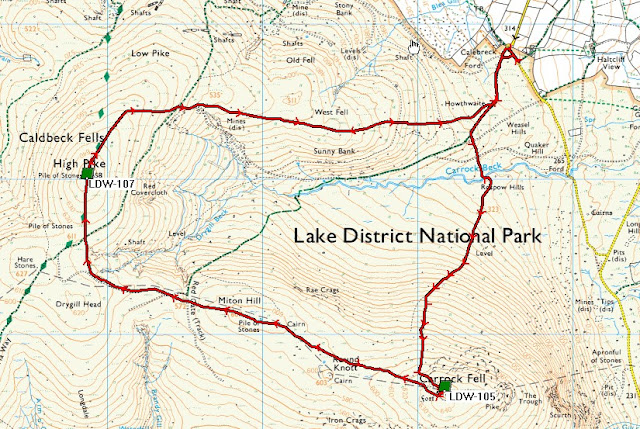 Route taken by Phil G4OBK, Judy (XYL) and Geoff on 16th February 2011
﻿﻿
Our visits to Keswick were becoming almost monthly in an effort to visit all 214 of A Wainwright's Fells. Taking advantage of the winter rates at the Keswick Country House we booked another two night, three day break for February. There was little snow about but despite that we stuck to the easier fells once again this time.  Judy and I arranged to meet Geoff in Mungrisdale village from where we then headed a few miles head north to a parking area at Calebreck NY 346359 from where we could climb (more like walk - it was virtually all grass) up the two chosen easy northern fells on our travel out day - Carrock Fell and High Pike (Caldbeck). We were walking by 1120am and on Carrock Fell just over an hour later.  Carrock Beck was easy to cross at 344350 and there were a few rocks to climb over to reach the summit shelter.   The weather was good and the summit was fairly busy with other fellwalkers, considering that it was a midweek winter day. The area was certainly more popular than I thought it would be.

I fired up the VX-170 and connected the usual "rucksack special" vertical antenna. It was no surprise when the loud station of Colin G4UXH/P came straight back as I knew Colin had planned to be out activating on some adjacent fells. He was actually on Bowscale Fell a mere 2 miles away and was planning to visit more that day with his partner Heather (soon to be M6UXH).  Only 6 stations were logged - mostly the regular chasers and we left the summit within 20 minutes to head for High Pike LDW-107.
﻿ 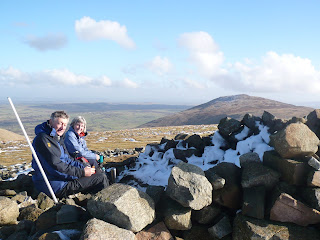 Within 50 minutes we were on High Pike and once again Colin G4UXH/P was first in the log - this time from Bannerdale Crags LDW-096 four miles away.  ﻿ On this summit nine stations were logged, with ODX being a contact with keen chaser Sue G1OHH in Lancaster.  It was pleasant in the sunshine as Judy and Geoff enjoyed a cuppa (pictured).  Our route down was gradual and less steep than the climb up to Carrock Fell. If I wanted an easier climb then it would have been better to do this walk in the opposite direction - anticlockwise. We needed the exercise. On our way down Colin arrived on Mungrisdale Common LDW-121 and was logged for a chaser point. There is evidence of mining in the area and several of the old tracks now served us as footpaths on our way back to the car, which was reached at 2.50pm.

We had made good time and decided to travel via the B road through St John's in the Vale to Thirlmere to undertake a late afternoon activation of Raven Crag LDW-186. Colin G4UXH we knew was bound for the haunted Souther Fell and there was a good chance of an S2S QSO once again.
﻿﻿ 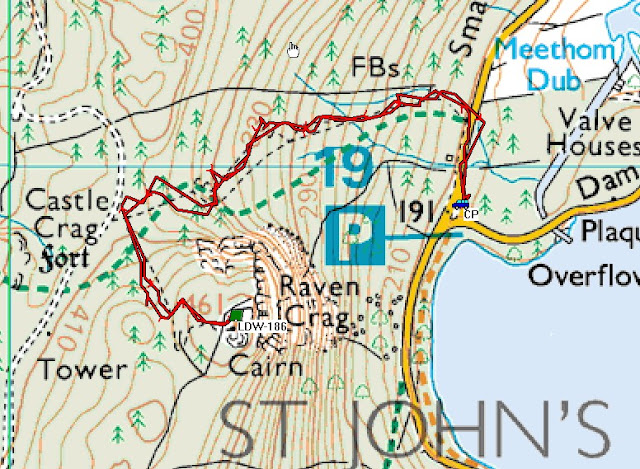 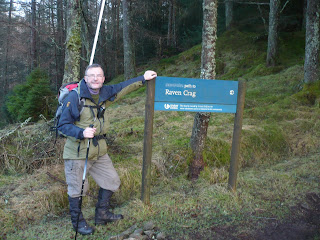 ﻿For Raven Crag which is part of the Central Fells, we parked in the top corner of Thirlmere on the small triangular free car park

.  We were walking by 3.40pm. It took longer to climb Raven Crag than I thought it would, the route taking us towards the wet Armboth Fell (see earlier blog) before turning back towards the lake. The path was very well defined through the woodland. For the first time on a Wainwright simply as a precaution on this well screened fell,  I was carrying my heavier Yaesu FT-857. I thought that the extra power may have helped qualify what is a 1500' fell screened on three sides by much higher mountains should no contacts be made with the low power.   I operated initially though using the 5 watts of power from the VX-170 and this was sufficient to easily qualify the summit.  Top chaser Geoff G4WHA/M was amazingly, the first station worked so I did not need to worry.  I believe Geoff was in Penrith town itself. This is a profile of the path - it is amazing that VHF signals glide around corners and allow contacts like these to be made: 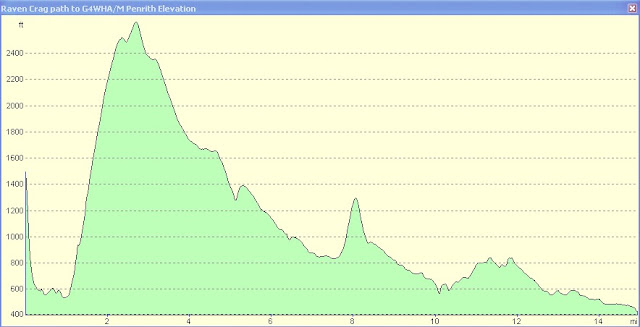 My location on Raven Crag LDW-186 (1512') is on the extreme left of the profile and the lump shown two miles away to the right is Great Dodd LDW-009 which is 1000' higher.  Penrith is on the extreme right and is around 425' ASL.  After working five stations I connected the higher power FT-857 and logged three more -  Colin G4UXH/P on Souther Fell LDW-163 with Heather (no ghosts reported today),  M6CDX Steve and the ever present John G0TDM/M, who presumably went out in his car to be sure of a QSO.  We stayed over 30 minutes before leaving and were back down at the car park at 5.20pm.

This was a great day's activating enhanced by Colin G4UXH and his partner Heather who also enjoyed their walk in the Northern Fells.
Posted by Phil G4OBK at 23:59

I become a Blogger in 2009 and my writings relate to my various activities as a fellwalker, walk leader, radio amateur, weather watcher and the other interests I have in my life as a middle aged bloke.
I have been a licenced radio amateur since 1982 and a short wave listener since 1968. I enjoy fellwalking and took up operating my ham radio station from the tops of hills in 2005.
I operate outdoors and indoors for Summits On The Air (SOTA) and Wainwrights On The Air (WOTA).
I am a member of the following organisations:
Ramblers
Ryedale Walking Group
The Wainwright Society
National Trust
English Heritage
Radio Society of Great Britain
Chiltern DX Club