Late September, and I was desperate to return to Lakeland to visit the range of  Wainwright's Far Eastern Fells around High Street, which I had been eyeing up from the other side of Ullswater during the previous week when the Ryedale Walking Group stayed at the Patterdale Hotel.  I decided on a solo trip with my terrier Treacle.  My new found fellwalking friend Geoff at this time, was not aware that I had started doing these flying day trips across to the Lake District from North Yorkshire, which involved having to drive around 250 miles and then on top of that, complete a strenuous walk.
﻿
﻿I used the car park to the east of Hartsop (donation asked for to help the local school) at NY 410130 which was very convenient for the walk up the lower section of Hayeswater Gill, turning right at 419129 to tackle the steep ascent above Hayeswater to the summit of Gray Crag LDW-090. I was feeling breathless on this climb when towards the top I came across another path coming up from Hayeswater - no doubt this would have been a more gradual ascent, but it was not shown on the map, as is usual. Once on this path the climb became easier and I was on top of Gray Crag in the shelter of a wall at 0912am. This was a climb of exactly one hour in fact from the car.  Best DX on the summit was a contact with Brian G4ZRP on the Wirral, using my usual gear of Yaesu VX-170 and J Pole rucksack Special antenna.  After the unrelenting climb I stayed for 20 minutes before making my way up to Thornthwaite Beacon on a most gradual ascent. The height gained was "money in the bank" and this was the sort of walk where it wouldn't be lost until much later in the day.  It would be possible to collect twelve Wainwrights in the day on this walk but to do that would have needed more than I felt I could muster, now into my late fifties!  I continued on with the thought in my mind - how long am I likely to be able to carry on doing fellwalking?  I was boosted by the thought that the previous week I had led a group of walkers to the top of Helvellyn via Swirral Edge, with two ladies who were 70 years of age and several more well into their sixties.

Thornthwaite Crag is most impressive - the views south to Windermere are superb and the beacon itself, built by some unknown person, stands taller than any on the tops of fells in  the entire Lake District.  I spent another twenty minutes here for the WOTA operation when a dissapointing five contacts were completed. I'm not sure why - the take off is good to the south but there were just so few stations active.  I tagged on to another solitary walker on my way across to Mardale Ill Bell.  Steve was a Chef and worked at a posh Michelin starred restaurant near Blackburn.  His wife was a nurse and was on shift today, so Steve had driven up to Kentmere to do the Horseshoe. Horseshoe I said - What's that?  Steve described the route he had taken from Kentmere pointing out the Wainwrights as we walked. There was Yoke, Ill Bell and Froswick and he still had Harter Fell, Kentmere Pike and  Shipman Knotts to do, which were now below us on his way back.

Talking to Steve the chef captured my imagination - his was another walk for another day. It was then that I realised I had overshot my "turning" across the moor to Mardale Ill Bell LDW-059 and so I said goodbye to Steve and turned back for the activation. point on the summit.  I left there at 1104am and was on High Street LDW-025 twenty minutes later.

It was still too early for lunch so I satisfied myself with seven contacts in eleven minutes before I moved off towards Kidsty Pike - the highest point of Wainwrights Coast to Coast Walk and in my opinion one of the best vantage points in the whole district.  Take off from Kidsty was pretty good with ODX being with Mike G4BLH in Nelson.

I kept meeting people who wanted to talk to me today. As I was about to leave the top a couple of mountain bikers appeared from the direction of High Raise.  They were obviously lost and hadn't a clue where they where. "Scuse me mate is this Loadpot Hill?" to which I replied. "No, this is Kidsty Pike. Do you have a map".  "Yes" replied the biker and promptly set about removing it from his rucksack.


He looked rather dumbstruck when he realised they were four miles from where they thought they were!  I didn't say anything but the path to and from Kidsty is not a Bridleway, so they shouldn't have been there anyway, but back on the Roman Road running across High Street.   I moved off towards High Raise LDW-031 which was just as busy as Kidsty Pike - full of folk (me included) having their lunches.  Six summits bagged before lunchtime - I was impressed! My antenna was extended and as more walkers arrived one chap with a plum in his  mouth  said "What is that eyesore then?". Safety in numbers - he appeared to be the leader of a group of middle aged, middle class men.  I explained it was my antenna and he just shrugged... I was meeting some Grockels today that was for sure!

As you leave the top of the Knott a wall goes NNW straight up to the top of Rest Dodd LDW-092, and I followed it.  The weather was perfect and I was feeling like tackling the challenge of the peat hags on the other side of Rest Dodd which led to the previously "no access" Conservation Deer Forest and The Nab LDW-139.  Before the PRoW legislation this was always thought of as the "Forbidden Wainwright". 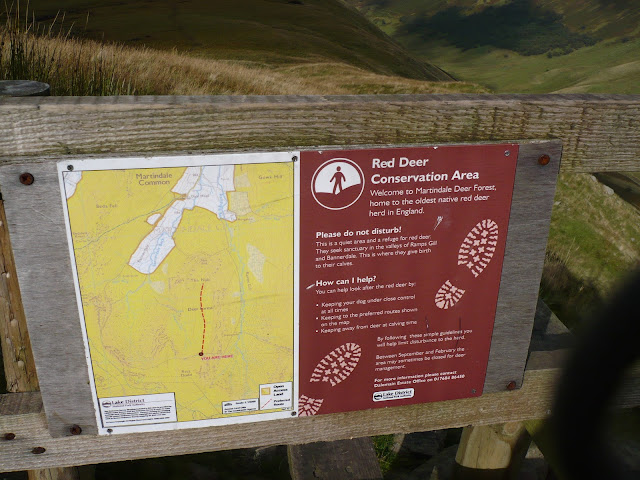 This was a two mile trip there and back from Rest Dodd and I went for it, noting the warning notice, put there by the landowner, who has concerns that the deer could be affected by fellwalkers wandering on the fells. The advice was to stay on the path, which was rather difficult to locate as the top of the fell  was more like an obstacle course running over numerous peat hags between two and four feet deep!


Fortunately for me we had experienced a fairly dry period, so the ground conditions were not so bad.  I made it the top of The Nab at 3.40pm for a 15 minute stay and never saw a single Red Deer on the Nab,  only the two I had photographed earlier where the public are more prolific on the Coast to Coast path to Kidsty Pike!  I ventured back to the wall where the stile and sign was and turned right to follow the wall to rejoin the path south of Satura Crag.  My 11th summit of the day, Brock Crags LDW-144, was now ahead of me with Angletarn Pikes LDW-143 to the north. I would have like to have done both but I was tired and suffering from a feeling of listless fatigue which started to unnerve  me.  There were no clear paths down to Hartsop shown on the map and so I was unsure of my way back to the car, where I had extra food and drink.  I opted to just  activate Brock Crags an dshortly after I made my decision it started to rain a little. anyway  I left the summit to make my way down just after 5.00pm.

My zig-zag course took me around some crags and on to a switchback path down to Hayeswater Filter House at NY 421130. A tarmac track I had used on a previous walk brought me back to the car park at Hartsop just after 6.00pm.   I had 54 QSOs in my logbook and another 11 Wainwrights under my belt.  After some food and a drink I felt safe and sound enough to drive home.  I was looking forward to my next outing which would be with my XYL Judy to the north of Helvellyn in the Eastern Fells.