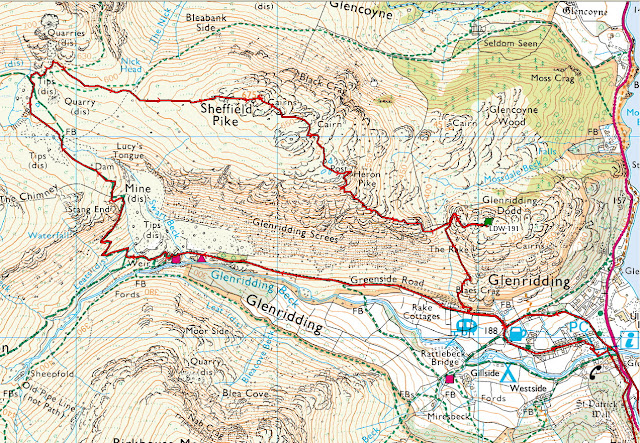 It was our last day with the twenty members of the Ryedale Walking Group. We had spent the week leading the group on walks in fine weather every day, around the Eastern Fells. Now it was all over - it was Friday and at 9.30am and as our friends bade their farewells  as they left the Patterdale Hotel, the dedicated (that was us) remained to have a day of fellwalking on our own. We set off from the Hotel on foot for the the former Greenside Mine area west of Glenridding , reaching the Youth Hostel at 10.35am.


We were unsure of our route as we climbed through the spoil of the mining  are west of Lucy's Tongue. There were large piles of stone, dust, rubbish and all manner of rock waste, however efforts had been made to keep what was there as tidy as possible  by landscaping it into neat  piles and the footpath through the wasteland was a good one.
I think we must have missed an earlier path, and so we continued on to grid reference 357183 where we met up with the Sticks Pass. We turned right here along the Pass and then after a short distance once we could see Sheffield Pike around 1 Km ahead of us, we struck out across the rough access land.  Unfortunately, when we reached the summit at 11.50am we had to share it with another couple who were intent on studying their Pictorial Guide.  I set up the VX-170 and vertical antenna and tried to keep my voice down to prevent disturbing them too much - after all they arrived at the summit from the other direction about two minutes before we did and so laid claim to it.
It had been a decent, steady climb and were now at 2215 feet ASL on top of LDW-099 Sheffield Pike. A CQ call brought in John G0TDM in Penrith and Sue G1OHH from Lancaster. Six contacts resulted in all - the last being none other than Rob G4RQJ, a prominent SOTA activator, who lives on Walney Island.  We stayed for 20 minutes and then set off down to the 1450 feet high Glenridding Dodd.
The path involved a fair amount of scrambling, which Judy seemed to relish. It goes without saying that I also did!  It took us 50 minutes to reach LDW-191 and to get there we visited one of the many Heron Pikes of  the Lake District.  I knew contacts from the well screened  Glenridding Dodd would be hard to come by and this proved correct. Sue G1OHH  in Lancaster was worked as were the usual Penrith stations of G0TDM and G4WHA/M. This profile below shows the path between Glenridding Dodd and Sue's home in Lancaster 35 miles away: 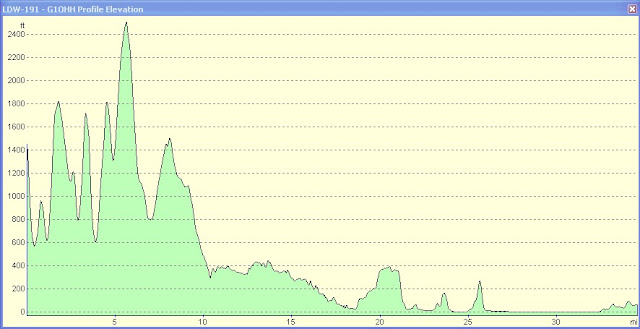 This profile in interesting and shows how in certain circumstances VHF radio frequencies go around corners and over the tops of the higher fells.  My location on the left is Glenridding Dodd LDW-191 at 1450' ASL. The first obstacle to pass over is the side of Birks LDW-125 at 1800'. The signal  then encounters Hartsop above Howe at 1750' before passing across the summit of High Hartsop Dodd LDW-165 and then the massive Red Screes LDW-049 at 2546'. ASL This was 1100 feet higher and 5.5 miles distant from my transmitter,. It really is surprising sometimes what is possible on 2m FM with such basic low power equipment as a Yaesu VX-170 handheld and an external vertical antenna. Sue's location in Lancaster is 70 feet ASL!
We enjoyed our lunch and then made our way down around the slopes west of Blaes Crag to the row of cottages below us, arriving back in Patterdale village just after 2.30pm with another two Wainwrights under our belts.