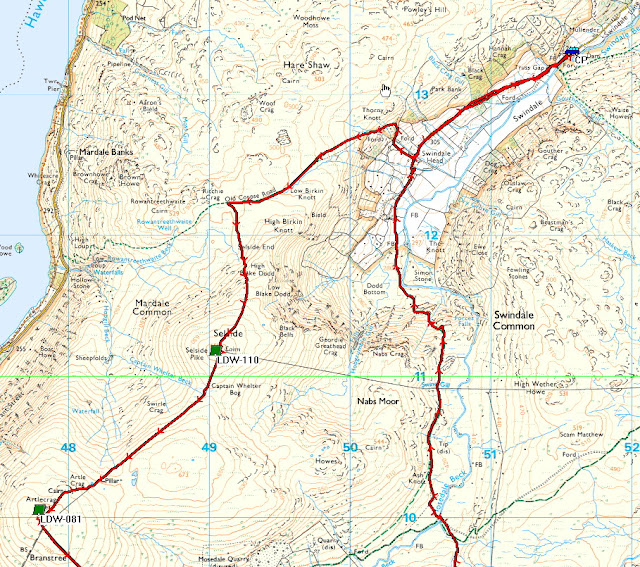 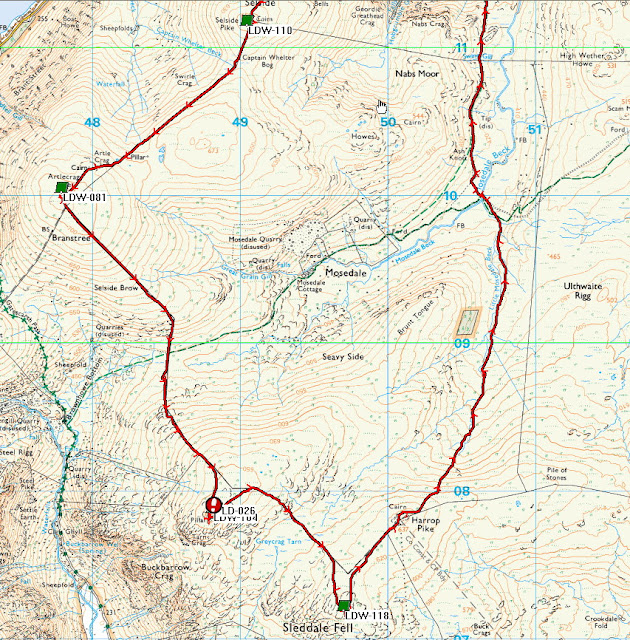 This was a very successful day with 41 WOTA contacts completed on 2m FM including summit to summit contacts from Grey Crag LDW-118. Hallin Fell LDW-203 and Pike o' Blisco LDW-086. 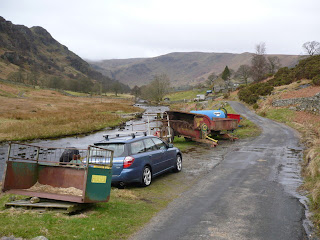 An early start from Pickering saw us walking up Swindale from the dam at NY 516133 by 9.00am. The parking for Geoff's car was not ideal, as you will see from the photo. There was room for two vehicles alongside the various farming implements stored here....a sign at NY 521142 states "No parking beyond this point". We could have parked there, however this would have meant adding another 1.5 miles to what was a fairly tough walk.
We walked on the tarmac public road up to the farm at Swindale Head  (no parking there) where we turned sharp right up the footpath known as The Old Corpse Road. This track dates back to when coffins needed to be brought over the hill from Mardale to Shap for burial. We left this path over access land at NY 491122 to climb up to Selside which was reached at 0910z. The usual WOTA equipment was set up, a Yaesu VX-170 handheld with 5 watts on 2m FM coupled to an external rucksack special half wave vertical antenna. The first CQ was answered by Geoff G4WHA/M in Penrith. The final tally was 6 contacts.  The picture below shows me (G4OBK) on the left with my pal Geoff by the shelter on Selside. Our two terriers Treacle and Pip are by our feet. 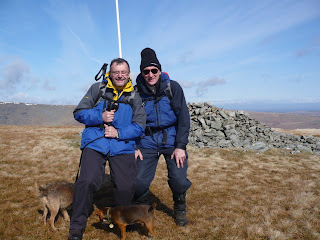 We lost very little of the height already gained to ascend Branstree LDW-081, our highest summit of the day. This was reached in 30 minutes after passing one of the old waterboard triangulation pillars near Artle Crag (see later - Tarn Crag). The extra height gained helped my signals get out and 11 QSOs were made from Branstree.  We enjoyed a snack and Treacle and Pip drank from the stone base on top of the otherwise bland grassy summit of Branstree.  This makes a perfect dog bowl, but only on the days when it has been wet. We then made for the the SOTA / WOTA dual summit of Tarn Crag. 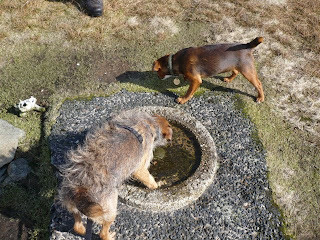 The navigation was easy from Branstree to Tarn Crag - a simple matter of following a fence down Selside Brow. The clag had come in now after around an hour of sunshine reducing visibility down to 50m. We left the fence at NY 488081 for Tarn Crag LDW-104 with its distinctive triangulation pillar, similar to the one seen earlier near Artle Crag (see below). The ground now became boggy in places with peat hags. However this area wasn't as difficult to cross as last month's walk in the Central Fells when I climbed Armboth Fell with Judy.
We stopped to chat to a couple on top of Tarn Crag - they were two of only four fell walkers encountered throughout the whole day. These grassy topped fells on the Swindale Round are not so popular....this couple had chosen a different route to us, coming up via Mardale and then heading across to Harter Fell - we intend traversing Harter Fell in two weeks time when we attempt to complete the Kentmere Horseshoe of nine Wainwrights. 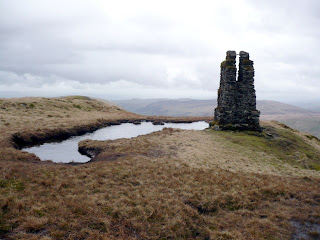 With the added interest of a few more chasers on SOTA LD-026 Tarn Crag, 14 QSOs were completed and this was a good spot to have lunch before moving off to Grey Crag.  Once again navigation was simple as we followed the fenceline to LDW-118 Grey Crag, which is a part of Sleddale Fell. The ground was even more waterlogged on this section, as Wainwright had mentioned in his pictorial guide. The fell is unremarkable (cairn pictured below) however I can appreciate why AW listed Grey Crag in his Far Eastern Fells pictorial guide - it is the view down into the verdant Sadgill and Longsleddale and away south west to Windermere that must have caught his imagination. Better on a bright day than the grey one we now had! 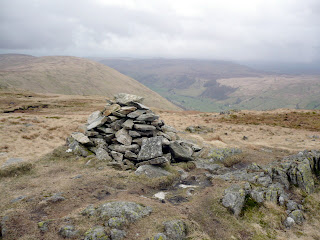 This final activation produced another 10 contacts including summit to summit contacts with Richard G0IBE/P on Hallin Fell and Jack G4COX/P on Pike o'Blisco. Jack was on holiday from Scotland and like most people contacted from the fells this day, was intending to visit the Blackpool Radio Rally on the following Sunday, 11th April. We had a good chat and finished just as my battery expired on the VX-170. My spare pack was not needed, and we made our way towards Harrop Pike (Geoff is pictured below with the dogs at the cairn there) and then we strode out across the access land down into boggy Mosedale. This was remote lakeland at its best though, not a soul, a building, a power line. Indeed nothing seen for several miles other than fells, moorland, a copse in the distance and a beck. There were no footpaths either for almost two miles until we reached the bridge that crosses Mosedale Beck at NY 506100. 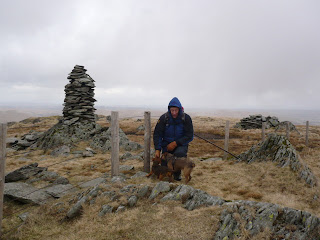 It took us well over two hours from leaving Grey Crag to reaching the car in Swindale. I was still elated thanks to the many friends contacted via amateur radio.  It seems to me that the interest in WOTA is increasing gradually, and operating during the Easter week obviously boosted the number of contacts. Indeed on Grey Crag the whole family of G6LKB (Dave) in Ulverston joined in, with son M0LKB (Andrew) and grandson M6LKB (Clifford) just arriving from Northampton and being handed the microphone as soon as they came through the door! The two Lakeland S2S contacts were also a real bonus.
Stations worked:
G4WHA Penrith (Four summits)
G1OHH Lancaster  (Four summits)
G0TDM Penrith (Four summits)
G6LKB Ulverston (Four summits)
G1KLZ Ingleton (Four summits)
M3TMX G4ZRP G4BLH G6MZX/M G0OXV/P M3WJZ/P G7OEM 2E0MND
M3NVJ G7CDA G4RQJ G4MYU G0IBE/P M0LKB G4COX/P 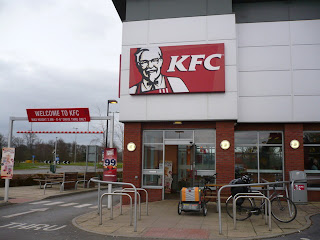 Job done we returned to Shap via Rosgill, passing several Coast to Coast walkers - one indeed clutching Wainwright's Guide to the Coast to Coast. We will be doing the same next month - we leave St Bees Head on May 19th and reach Shap on May 23rd.  That day I will activate Angletarn Pikes to finish of the FarEastern Fells.
So at 1615z we entered the KFC in Penrith and decided to "go large". I think we deserved it after the Swindale Round!
An uneventful drive by Geoff - thanks to him for being a great walking companion and driver. We were back home in Pickering by 8.00pm local time.
Hopefully we will undertake the next walk, the Kentmere Horseshoe taking in Yoke, Ill Bell, Froswick, Thornthwaite Crag, Mardale Ill Bell, Harter Fell, Kentmere Pike and Shipman Knotts in two weeks time, more than likely (weather permitting) on Weds or Thurs 21st/22nd April.
A special thank you to those who spotted my activity on the WOTA and SOTA websites.