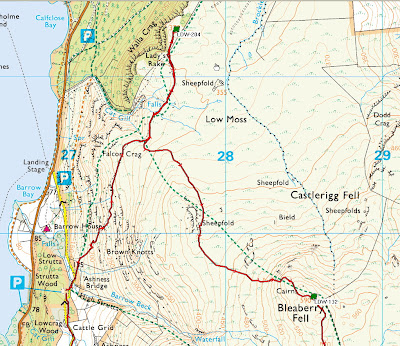 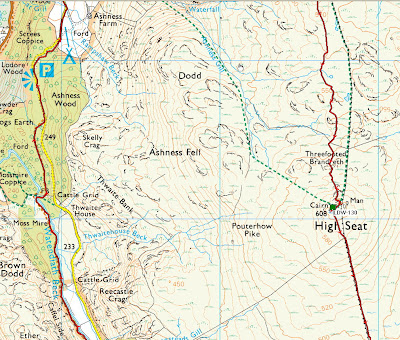 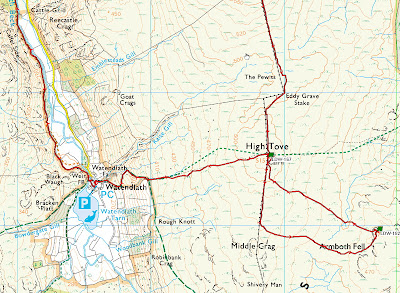 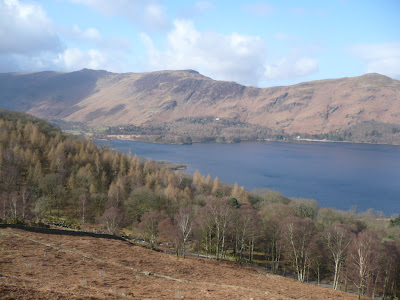 We had a rough day in mist on the Wednesday when we covered the north end of the High Street range over Loadpot Hill from the Far Eastern Fells book, and then a wet Thursday when we had a motoring tour of the Lakes and bought some gear in Hawkshead and Ambleside. On Thursday night I delved into the Central Fells book and decided that we would attempt these five Wainwrights south of Keswick.  I would have liked to have made it six to include Raven Crag (above the top end of Thirlmere) however that would have pushed us to our limits so it was left out. Maiden Moor south of Catbells and at the end of Derwenter is pictured from the path leading up to Walla Crag from Ashness Bridge.

We were going into the unknown. Would getting to Armboth Fell LDW-182 from High Tove LDW-167 prove as wet and boggy as Wainwright said it would be? The answer would be yes. 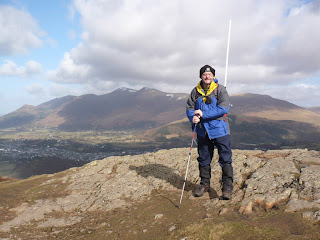 There are a choice of access points and various routes to climb these five fells - more variations certainly than one can contemplate on walks in the Eastern and Far Eastern Fells area. We decided to park in the NT car park by Ashness Bridge - non-members are asked to put a donation in the box.  We set off north climbing above Derwentwater reaching Walla Crag (Pictured) in 50 minutes. Super weather and a very pleasant, steady walk.  Fantastic views in all directions and now I understand why Walla Crag is such a popular walk from Keswick. Only two VHF radio contacts resulted - Walla is well screened but we made it to John G0TDM and Geoff G4WHA in Penrith. Things got better later when we gained more height.

Bleaberry Fell LD-132 above us to the south east,  looked imposing. We retraced our steps and left the path just before Falcon Crag. When the going got steep the path had been worked into steps and it was a steep but steady climb the top which was reached once again, in 50 minutes after departing from Walla Crag.

Wainwright had said it got progressively boggy from hereon and that proved correct as we dropped off Bleaberry Fell into a depression and headed towards Threefooted Brandreth - an interesting named piece of rock surrounded by peat hags. It only took 35 minutes to reach High Seat LDW-130, our highest point on the walk.  (Pictured below right) 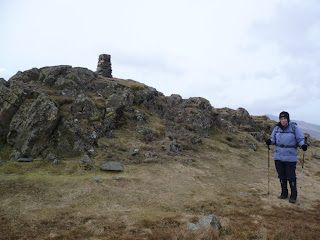 This was a nice spot to take lunch in the sunshine and out of the wind. Believe me, the lunches provided from the Patterdale Hotel are first class! The radio was pretty good too, with seven contacts logged including GW1NVY in Wales.
Suitably refreshed we headed south to High Tove LDW-167 which took another 30 minutes. The cairn here lies on a flat top summit and had a long length of wood stuck into it (pictured below). 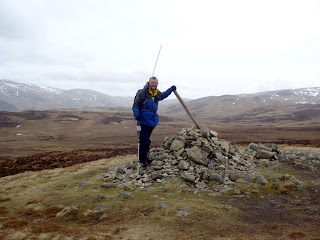 The path from Watendlath (which we would later use) runs across the watershed summit of High Tove down to Armboth, a hamlet on the edge of Thirlmere.  We needed to make for the dreaded Armboth Fell LDW-182 across the waterlogged moor. From High Tove you could see the pools of water, feeders for Thirlmere. Wainwright said the route we took was  "not recommended" and "the flat desolate top is little better than a quagmire, a tangle of swamp, heather and mosses. Armboth Fell is one of the few fells that are not really worth climbing". I wouldn't go so far as to say that myself because if you are intent on bagging all 214 fells and like a challenge as I do, then what needs to be done needs to be done. This was our chosen route and in retrospect I would do it again!

The great man advised not to take the direct walk south east but to walk south first and follow the fence, which is what we did. We turned east just before the rise up to Middle Crag and it was pretty wet.....we were "gatered up" and finished up on the summit 42 minutes after leaving High Tove with still dry feet and trousers. The enormous lump of rock and very small cairn in this sea of spagnum moss, water and frogs signifies the top of Armboth Fell (Pictured below) as we came away and made back to High Tove. 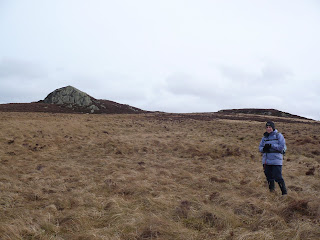 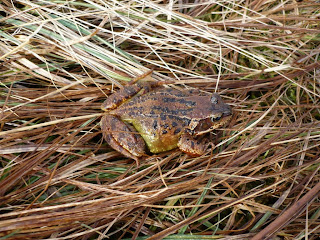 The attraction of Armboth Fell to AW was most obvious, being the view towards the Helvellyn range above us to the east.  I later discovered that there is indeed an Armboth Fell Appreciation Society - a sub branch of the Wainwright Society in fact!  Considering the proximity of the higher fells I was amazed to make contacts with Penrith, Lancaster and Nelson in Lancashire.   We left the top after carefully looking towards High Tove for signs of water in the depression below us. We decided to cut a more direct route this time, so we headed off on a bearing of around 300 degrees back to High Tove and found this route to be dryer than our outward trip. It has been said on the Wainwright Society website that the moor is not as wet as it used to be in AWs day.... 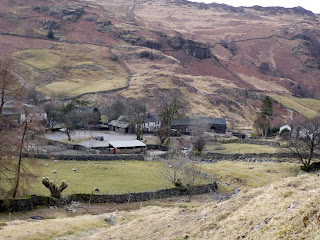 The steady walk downhill from High Tove to Watendlath (pictured right) provided some lovely views of the Central Fells which we still yet have to conquer - there is so much to look forward to in the coming months and years. Let us just hope that our knees and our bodies hold out long enough.  The cafe at Watendlath beckoned, however when we got there "CLOSED" for winter - we were two weeks away from Good Friday, but just that bit early.  The toilets however were useful. So we now faced a 2.5 mile walk without refreshments. Oh well, it had been worth it and we enjoyed our dinner back at Patterdale all the more.
Stations Worked (21 Contacts):
G4WHA Geoff Penrith (All Five summits)
G0TDM John Penrith (All Five summits)
G1OHH Sue Lancaster (Four summits)
G1KLZ Doug Ingleton (Two Summits)
G4BLH Mike Nelson (Two Summits)
G6LKB Dave Ulverston (Two Summits)
GW1NVY Ken Llandudno

Thank you to all the above WOTA Chasers, for an enjoyable days walking enhanced by these contacts.