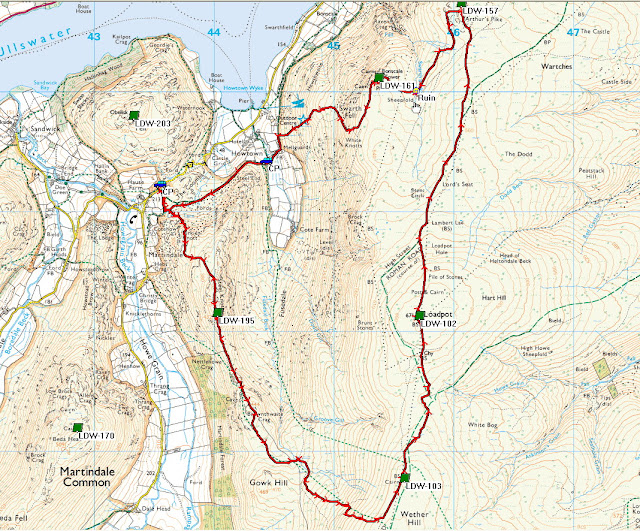 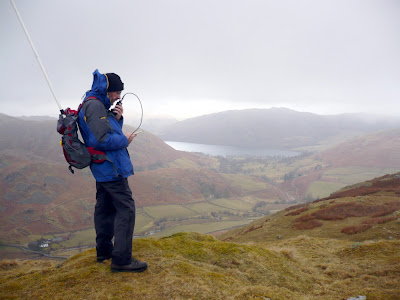 G4OBK/P Operating with rucksack antenna from Steel Knotts LDW-195
A dreary day greeted us as we made our way around Ullswater to Pooley Bridge and then along the east bank of the Lake to Howtown.  The road alongside Ullswater was closed all night during March 2010 for reinstatement after part of it had subsided into the lake over the bitter winter period. No sooner had we passed through the traffic control we came across an accident. It was fortuitous that we had a police van following us at the time who immmediately pulled in. After negotiating the hairpins at Howtown we parked up at St Peter's Church Martindale NY476192 and took the route out of the back of it up to Steel Knotts LDW-195 or Pikeawassa as it is also known.  The direct route was steep over rough ground across the top of Birkie Knott and is not recommended. AW didn't recommend it either... I should have studied the Far Eastern book in greater detail before the walk, rather than after it! So next time I will park at NY444194. The road is tarmac up to there and parking is plentiful. You could then take the ridge of Steel End to the intended target, as the late great man suggests. 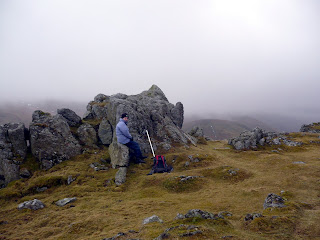 The mist got steadily worse as we climbed the north facing slopes, which still carried several snow drifts. We joined the ridge at NY440184 which incurred a climb of 600 feet but it had been slow going over the rough hillside. Steel Knotts was reached in just short of an hour and it was less than a mile from the church, which gives you some idea how hard the climb was. Three stations were worked: G0TDM and G4WHA in Penrith and G6LKB in Ulverston - that contact was quite surprising, on a 27 mile path passing from us at 1417' ASL straight through Hartsop Dodd at 2028' and Stony Cove Pike 2503' a mere six miles away....and radio signals travel in straight lines....not in the Lake District they don't! 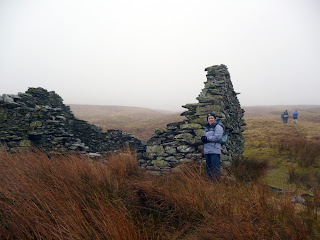 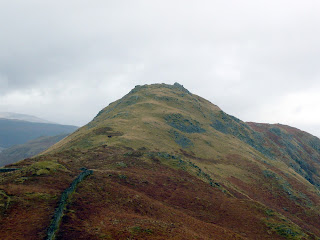 We left the summit and made for Wether Hill LDW-103 which lies towards the nothern end of the High Street ridge.  Brownthwaite Crag has to be negotiated and it pays to keep the wall on your right until you reach a ruined building (pictured above right) at NY447169.  We continued climbing until we hit a steep snow bank on the sunless north facing slope. Without crampons Judy said "we're finished that's it" to which I replied "not yet".  Visibility was now down to less than 50m and it would stay like that until we dropped back down to Ullswater. So we tracked south and found a clear piece of fell without lying snow. LDW-103 Wether Hill was reached 90 minutes after leaving Steel Knotts - we were well beyond the estimated timing of an hour. In the mist photo opportunites were lacking and we lost the bridleway several times on our way to Loadpot Hill LDW-102, the highest point of our walk.  The remains of the chimney at NY457178 were much reduced than when AW had drawn them in his 1957 Pictorial Guide to the Far Eastern Fells. 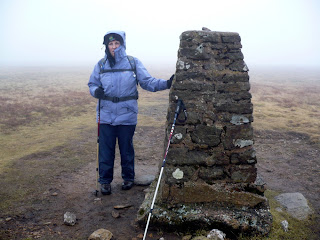 Judy at the Pillar on Loadpot Hill LDW-102 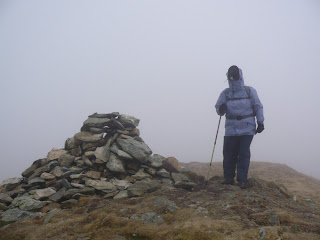 A low QSO tally was noted all day which on top of the weather was dissapointing. After Loadpot the ridge falls away to Arthur's Pike, a normally nice rocky little summit and on this one we had our late lunch, to be joined by a group of Duke of Edinburgh students with their leader. Most were suitably clad with correct footwear and clothing, apart from one wag wearing shorts.  The picture (right) shows Judy completely hooded up on Arthur's Pike due to the swirling wind and cold mist. A couple of the lads seemed interested in the radio and what I was using it for.  We left the summit after our lunch and used access land (if there was a path we couldn't find it in the mist) to reach another ruin at NY457200 which is where we forded Swarth Beck and took the quad track to the summit of Bonscale Pike, 25 minutes after leaving Arthur's Pike.  Once again only Penrith stations made it into the log.
As we came down the switchback path on Swarth Fell to Mellguards we finally had a view of Ullswater. The steamers were running and it was a fine sight after hours of mist and a dissapointing contact rate from the summits. We used the bridleway below Steel End to return to the church car park, five summits bagged and for sure, the most miserable walk of the five undertaken that week, of that I have no doubt.
Stations Worked (13 Contacts):
G4WHA Geoff Penrith (All five summits)

G0TDM John Penrith (All five summits)
G6LKB Dave Ulverston (From Steel Knotts)
G7THI/M Frank on A66 Trunk Road (From Wether Hill)
G4BLH Mike Nelson (From Loadpot Hill)
This walk will be done again in better conditions and with hindsight over an amended route.  I feel we really missed out today.