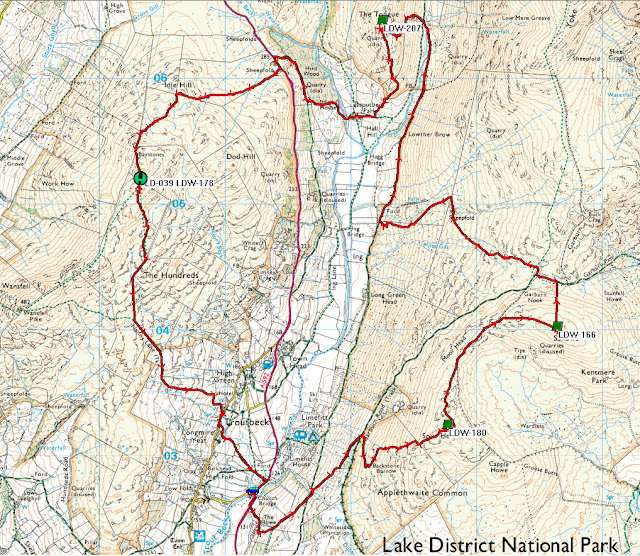 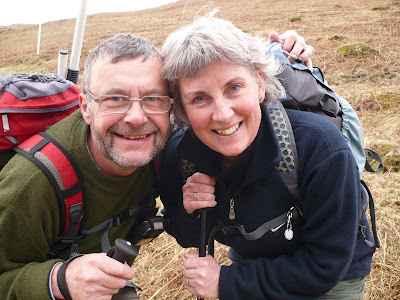 Posing on the climb of the east flank of Troutbeck Tongue 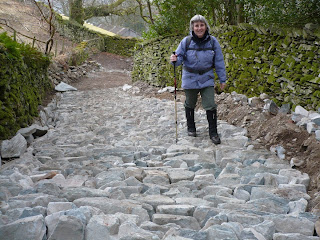 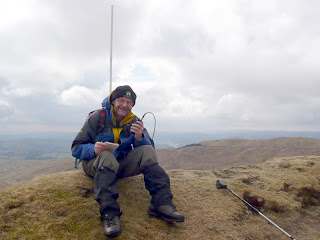 An early breakfast at the Patterdale Hotel and then straight onto the Kirkstone Pass to secure our parking place at Church Bridge, Troutbeck NY 412027. We were walking just after 9.30am. Any later than that and we would not have secured a parking place.  I usually source the routes from various places as well as the map of course, and this one is well known as "The Troutbeck Medley". It came  from Stuart Marshall's book "Walking the Wainwrights".  I usually study Stuart's book before these walks, as well as Wainwright's Pictorial Guides.  This was the first time that we have followed one of Stuart's walks to the letter by including all the summits suggested and sticking to his identical route between them.
We set off for Sour Howes by taking the bridleway past The Howe at 413024 where some path reconstruction work was in progress, supported by the Fix The Fells Charity (Pictured).  This charity does some serious work in restoring eroded footpaths as this one is. In fact the Wainwright Society have raised thousands of pounds to help projects like this one. We continued above Limefitt Park - a large leisure park of cabins, chalets and caravans in Troutbeck that has been built up over the years. We briefly joined the Garburn Road track by crossing it before climbing the access land up onto the dull fell known as Sour Howes LDW-180.  I didn't take a photo here but the cairnless top is a series of grassy topped hollows. We activated for Wainwrights On The Air and made five contacts.

There was little to see as the mist had come swirling up the hill from Lake Windermere, although this lack of vision was to be short lived as the sky soon cleared once we set off to our next summit.  We dropped around 100 feet into a depression at Moor Head and then ascended 200 feet to Sallows LDW-166 (pictured right).

From here I made contact with Geoff G4WHA in Penrith. He was 17 miles distant from Sallows (1693') with my signals passing through the line of sight path in the depression at 2250' between Mardale Ill Bell (LDW-059) and Harter Fell (LDW-048) less than four miles from where I was stood. An amazing contact and one worth highlighting.  There was no chance of other contacts with Penrith that day from the other two summits due to the presence of the High Street range above us. 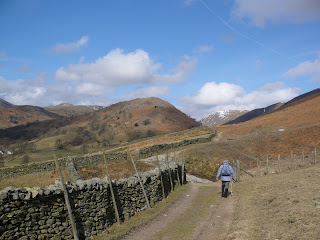 We now dropped down access land to the Garburn pass but soon left it to continue losing height passing the sheepfold at 428049. We took some rest and also our lunch on the side of the hill near Ing at 422048 and then headed north up Hagg Gill with Troutbeck Tongue LDW-207 in our sights (Centre of picture). The unsafe and rickety foot bridge at 426064 was crossed despite it being officially "closed".  Stuart Marshalls route advised that we then take the precipitous route up the east side of the Tongue and this we did.  We were warned. Climbing this was all part of the adventure for me but with some trepidation for Judy owing to the steepness of the hillside. Another couple just above us were following the same route and we persuaded them to take our photo once we were on top (below left). They weren't impressed by the choice of route either. 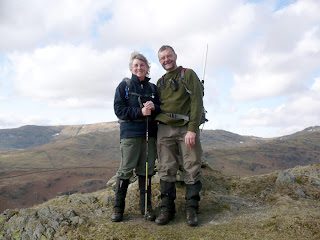 We tried to tempt the couple we met into coming with us over Baystones (Wansfell Pike in Wainwright's Guide) which we were looking at from Troutbeck Tongue, however this was their first walk since 2009 and they felt they had done enough.  They left the summit as I got out the VX-170 and spoke to the stations who could hear me. We left the summit by the south, on a proper path and only wished we had gone up and back that way. If Judy ever gets hold of author Stuart Marshall a few choice words will be said! We walked down to the farmstead at Troutbeck Park and took Stuart's suggestion by following the wall up on the edge of woodland at High House via 417058 to join the bridleway above it. This looked like trespassing to us, however most farmers and landowners in Lakeland seem relaxed about walkers crossing their land and there was no one around anyway. What an excellent short cut, Stuart had redeemed himself. We crossed over the Kirkstone Pass at spot height 285 and then followed the wall up to Idle Hill on access land (no path and fairly boggy), the shortest route up to Baystones. Tiredness was setting in now as we had lost so much of the height gained earlier on the walk. This had to be recovered to ascend Baystones.  We were then confronted by a wall corner at 406058, which we had to climb.  The top was eventually reached and more contacts completed on our fourth and last WOTA and our first SOTA hill of the day.  Baystones still counts for SOTA and is G/LD-039, but not for long. The Relative Hills of Britain Group have surveyed it and deemed that it does not meet the 150m height difference rule. The SOTA Association Manager for England Jimmy M3EYP intends deleting it from the SOTA list in July 2010.  It will of course continue to count for WOTA. 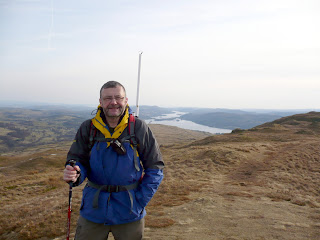 On Baystones (Wansfell Pike) LDW-178
We would have liked to walk the ridge across to Wansfell Pike but due to depleted energy levels having climbed over 3000' we cut our losses and made down to The Hundreds joining Nanny Lane at 403040 to take us back to Troutbeck and another footpath, which led to the back of the Church near to the car park which we reached at 5.15pm.
Wansfell Pike / Baystones is another place we will revisit, probably from Ambleside once the 214 fells have been completed.

This had been a great walk and a reasonable number of contacts were completed for WOTA.