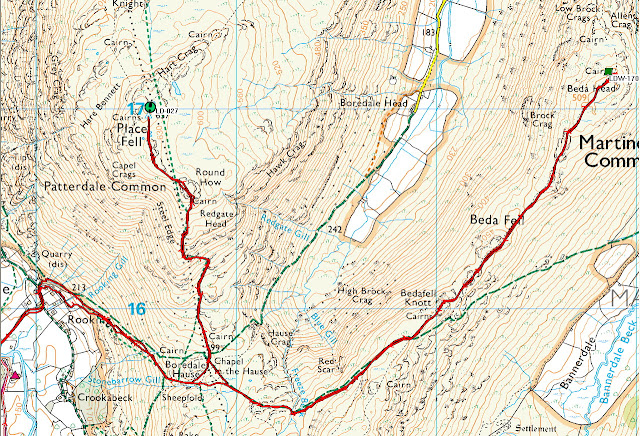 The first day of our week in the Lakes - the day before was spent walking in the North Pennines when we activated Wild Boar Fell for Summits On The Air.  A walk was chosen that could be done from Patterdale. We had been up Place Fell LDW-108 before, chasing SOTA points in 2008 and we went on to activate Hallin Fell that day as well. This was before Julian (G4ILO) from Cockermouth gave birth to Wainwrights On The Air.  So Place Fell needed to be climbed again and we also tagged Beda Fell on to the walk, with Hallin Fell having already been activated for WOTA again on Walk 7  last September.  I knew we would have no shortage of contacts on 2m FM from Place Fell, but Beda Fell LDW-170 at 1670' would be different due to the proximity of the much higher High Street to the east, Helvellyn ranges to the west and Stony Cove Pike and Red Screes to the south.  I knew I could count on the Penrith stations of G0TDM and G4WHA to be there however, as the town can be seen from Beda Fell. 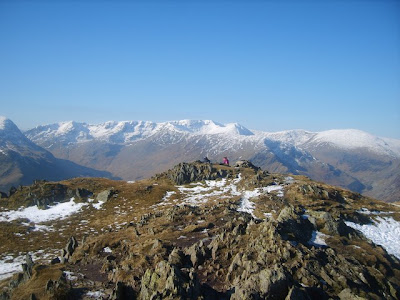 Place Fell         (Photo courtesy of Michael Graham under CCL)
We left the Patterdale Hotel at 9.25am and walked up to Boredale Hause from Rooking. Do you take the high or the low path - both go to the same "Place" so it doesn't matter! We went up to the Hause on the higher path and came back from Beda Fell on the low one.  It's a good steep plod to the top of Place Fell LDW-108 (SOTA LD-027) and a relatively popular walk as far as the Far Eastern Fells go. We reached the summit in 90 minutes - Judy wasn't in her best form but she got fitter as the week progressed. We didn't pass anyone but a couple of very fit walkers passed us. In my enthusiasm to reach the trig pillar I went ahead and slipped and fell sideways - no damage at all, however there was an 8 foot drop just below me and it brought home that one should take more care, it is so easy to break an arm or leg and become another Mountain Rescue statistic.

As this was a SOTA summit I telephoned Roy G4SSH and asked him to spot me on the SOTWatch internet page, this always helps line up a few callers and it did.

M1MAJ/M Martyn (Near Lad Law Lancashire)
M3ZCB/M Caroline (Near Lad Law Lancashire)
G4WHA Geoff Penrith
G1CCL Dave Morecambe
G4BLH Mike Brierfield
G4RQJ Rob Walney Island
I was pleased with that. We could have turned this into a circular walk, however to save extra ascent and a few miles walk we descended back to Boredale Hause and then took the bridleway above Red Scar and along Bedafell Knott reaching Beda Head cairn in time for our lunch. The walk down from Place Fell had taken us 85 minutes. 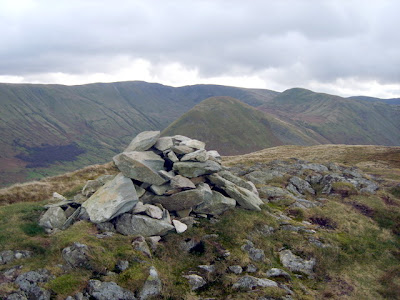 Beda Fell Cairn    (Photo courtesy of Michael Graham under CCL)
I heard from Roy that John G4YSS was QRV on Buckden Pike and I was hopeful of a contact. I heard a faint signal coming in on 145.500 and thought this to be John, however when I looked over to Wether and Loadpot Hill two miles east of me and 600ft above my altitude, I knew that a QSO with John would be impossible. So I called CQ from Beda Fell and settled for what I expected, the two Penrith stalwarts John G0TDM and Geoff G4WHA!  Summit qualified, we enjoyed our lunch with the rig on squelch, no further takers, so it was back to the Patterdale Hotel, calling at the Patterdale Stores to purchsed those valuable commodities that we would need later in the week, some Kendal Mint Cake and bananas.
On our return to the Hotel I was able to update our progress on the WOTA Website and consider our walk for the following day, which was to be the "Troutbeck Medley".