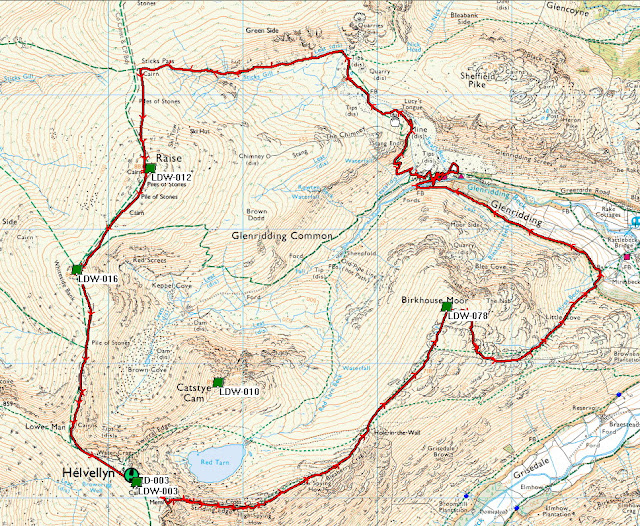 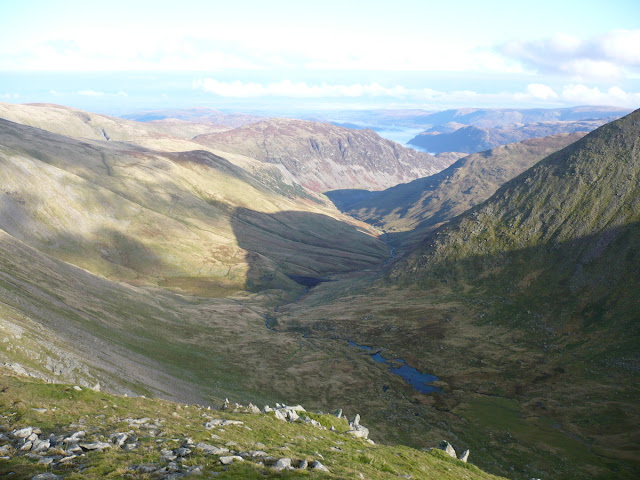 Looking down Brown Cove across Patterdale to Place Fell
This was the walk on which I climbed my last fell from the Eastern area pictorial guide, Birkhouse Moor LDW-078. This was the last of our Wainwright Walks of the year due to the heavy snow which fell in December which prevented  us doing a walk that we had planned for between Xmas and New Year.. 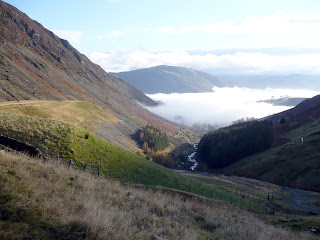 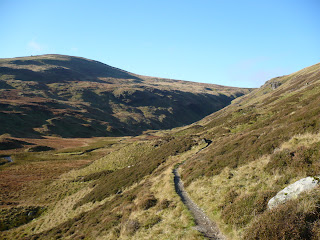 After our one night stopover at the White Lion pub in Patterdale we drove up the road to Glenridding and took the Greenside Road, which turns into a rough track up to the Youth Hostel at the old Greenside Mine. We parked up there (free) and set off on the same path I took last September when Judy and I conquered Sheffield Pike and Glennridding Dodd - Walk 9). We made for the Sticks Pass, passing the moonscape of old quarries, spoil and mine. Most of the piles of waste here have been tidied up, but once grid square NY 3518 is reached nothing much grows on the dead ground. You leave all this behind once you get on to the Sticks Pass bridleway and head west, with the ski tow and hut above you on the flank of Raise LDW-012. This was a great route and I hadn't walked this way before on my three previous visits to the top of Helvellyn. 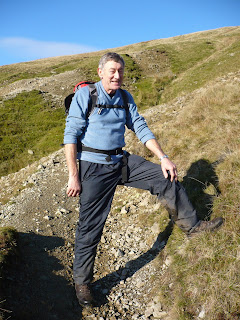 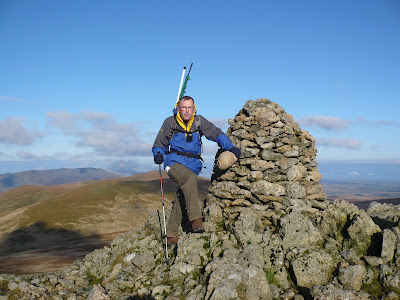 Phil G4OBK on White Side LDW-016 with Geoff pictured on the right just below the summit.
It was Rememberance Day and Geoff (not a radio ham - pictured right) and I paid homage to the fallen by taking a two minute silence just below Raise. The top was just short of 3 miles from our start point, with  a climb of 1950'. It had taken us 97 minutes, including the two minutes silence. 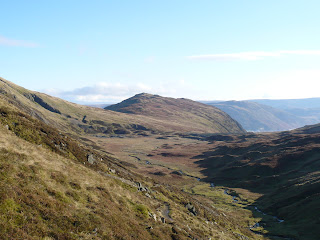 Five stations were logged from Raise and we moved off to reach White Side LDW-012, a mere 12 minutes later, to make another four contacts.  We pushed on to the (as always) busy Helvellyn and bumped into the couple we had met the previous day on Low Pike. They had come up from Grisedale Tarn across Dollywagon and Nethermost Pike.
We took a 35 minute lunch break in the comfortable shelter on Helvellyn, LDW-003 (also SOTA LD-003) and completed ten contacts, incuding my first QSO of the day with David (Dai) 2E0DAI/P on Coniston Old Man (LDW-030). We moved off and descended on to Striding Edge. Knowing that Dai was going across Brim Fell (LDW-037) soon after we left the shelter I left the radio switched on.  Soon I heard Dai break the squelch and call me before I had dropped too far down, and we easily made the contact.
It was exhilarating on Striding Edge that day, there was little wind and it was safe enough to actually walk the ridge on the top, which I was unable to do the last time I crossed it. We reached the Hole in the Wall and continued on to Birkhouse Moor LDW-078 where I made four contacts to complete bagging the Easter Area Fells for WOTA.  I struggled with two of the contacts - Mike G4BLH in Brierfield and Sue G1OHH in Lancaster, owing to close presence of St Sunday Crag and the Helvellyn range to the lower location of Birkhouse Moor, but by moving slightly around the ill defined Birkhouse Moor summit we were able to exchange reports. 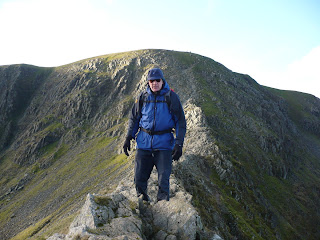 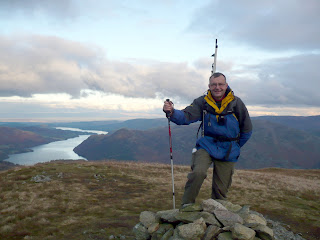 Thanks to all the Stations Worked (25 contacts):

We left the summit for the 3.5 mile walk back to Greenside YHA having covered just over nine miles, however it felt like much more than that on account of the 3250' of ascent. A short drive back down Greenside road and we found a cafe that was still open in Glenridding even though it was now dark. We paid a high price for tea and cake before we hit the road back to Pickering, but it was very refreshing and well worth it.  "Mission accomplished", after a very enjoyable two day walking break completing the last of Wainwright's Eastern Fells.