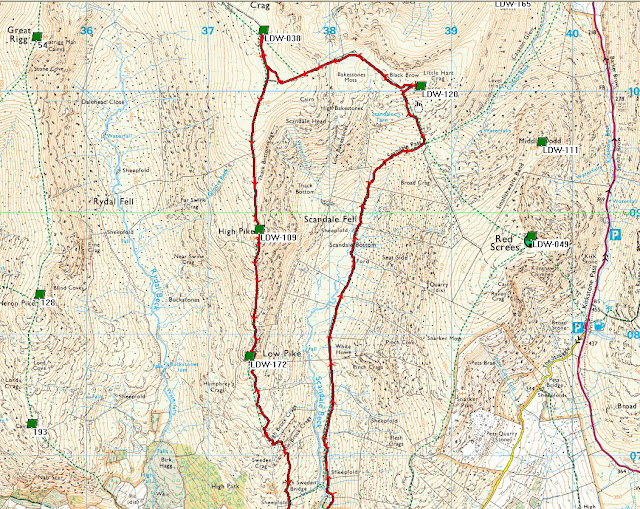 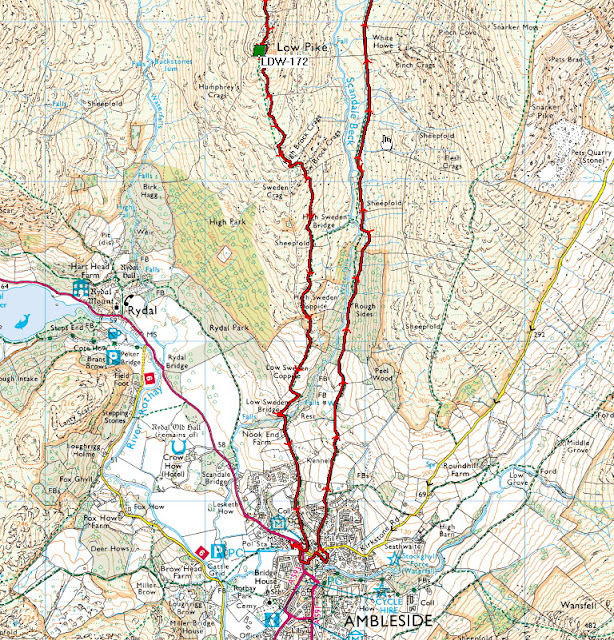 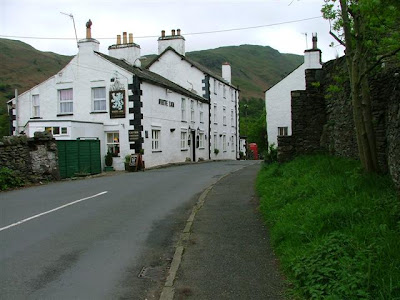 An opportunity arose in November (just before I went overseas for a month) to finish off the last few summits in the Eastern Fells pictorial guide.  This would however require a two day expedition.  Geoff, enthusiatic as ever, agreed that we go midweek and stay at The White Lion pub in Patterdale for one night. This well known pub was right on the spot for Walk 15 the following day. (Thank you to Mick Garrett from Geograph for allowing me to use his photo under ccl licence). The White Lion is across the road from the Patterdale Hotel, which we have used as a base previously when walking the Eastern and Far Eastern fells.  Anyway, we had a walk to do before we checked in and arrived at the main car park in Ambleside where we paid our £6.50 for all day parking and were walking by 9.30am. It took a while for us to find our way out of town but after a circular tour on foot we headed due north up the eastern side of Scandale on a well used track. Our target and the highest point of the day was Dove Crag LDW-038, over five miles away. The route was very straightforward on paths and tracks. Our route took us past High Sweden Bridge, slowly climbing up to the Scandale Pass when it got steeper. At this point we encountered mist which plagued us for the rest of the day allowing few photo opportunities until we were well on our way down the ridge towards the end of the walk. Before we reached Dove Crag we decided to climb Little Hart Crag LDW-120, which meant a minor detour. This was a new Wainwright for Geoff and one which I had visited on Walk 4 on my own last August.  I made three contacts on 2m VHF from Little Hart Crag, it wasn't pleasant in the mist. We arrived at 11.30am - a two hour walk from Ambleside.  We were soon on our way to Dove Crag where we fared better, making seven contacts. I am told the view from Dove Crag is superb, but today because of the mist we saw nothing, whilst we sat enjoying our lunch.  We left, retracing our footsteps for 300m and then heading due south down the ridge via High and Low Pike back to Ambleside.  I'm sure this is a great walk - we must do it again in better conditions! High Pike LDW-109 was visited (six contacts) and then as we descended to Low Pike (four contacts) where the cold swirling mist started to disappear and at last we had a view, of sorts: 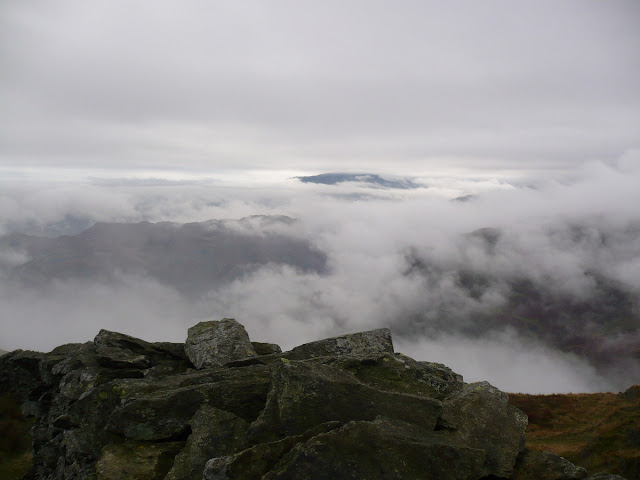 Click the picture for a larger size
We had seen very few people all day but bumped into a couple on Low Pike for a chat. They were using one of the SATMAP Active 10 GPS units which display OS Maps. and gave us a demonstration of the unit. I was quite impressed and although buying the unit does not look so expensive the cost of buying the OS mapping on SD card is, so for now I will stick with my Garmin Etrex Vista HCX unit with the basis topographic mapping. The couple are seen (below) heading off back towards Ambleside, unit in hand. They also gave us some useful advice about a cafe which stayed open late in Ambleside which we noted. The radio finished with only four contacts and so after posing for some pictures we left Low Pike at 2.45pm to make our way down towards Ambleside. 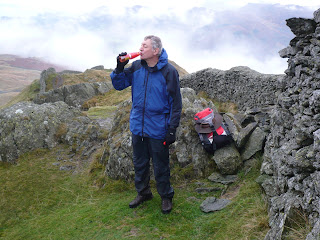 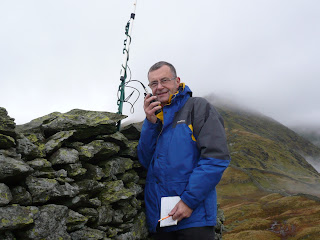 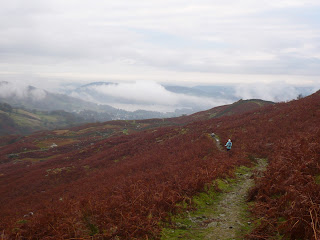 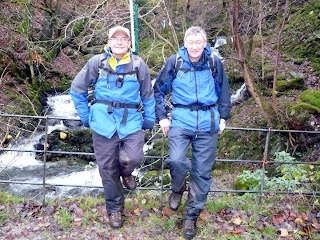 Top left: Geoff enjoying his usual energy drink - Lucozade!
Top right: Chatting on Low PIke to ham radio operators in their cosy radio shacks
Bottom left: The couple with the Satmap Active 10 unit set off for Ambleside
Bottom right: The couple took our pictures when we caught them up at Low Sweden Bridge
So what do you do when you have done your walk, you are staying overnight and you arrive back in Ambleside at ten to four?  You shop of course, and there were some real bargains in Milletts sale. I think between us we spent about £60 on various garments - socks, fleeces and shirts.  We found the cafe, enjoyed some cake and tea and then made our way up The Struggle to the Kirkstone Pass and then on to the White Lion, Patterdale to check in for the night.
Stations contacted:
Sue        G1OHH      Lancaster (all four Wainwrights)
Geoff     G4WHA     Penrith (all four Wainwrights)
John      G0TDM     Penrith (all four Wainwrights)
Mike      G4BLH     Nelson (three Wainwrights)
Gordon G4VYR      Liverpool
Den        M0WOW   Nelson
John      M0JFE      Fleetwood
Vic         2W0VSW Isle of Anglesey
Total contacts made: 20
Posted by Phil G4OBK at 23:59