Phil (Judy up to Deepdale Hause only) walked 11.8 miles with 4150 ft of ascent
(Hart Crag and Hartsop Above Howe also traversed but not activated for WOTA) 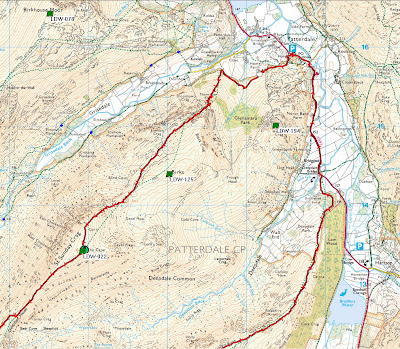 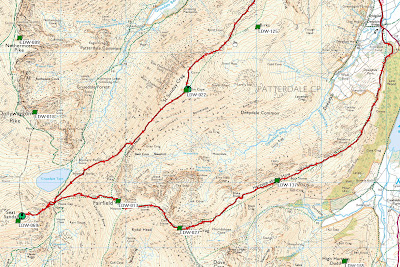 I hadn't considered activating Wainwright's when we set out on this walk. That interest came later in the year once I acquired a taste for the Lakeland Fells and this walk help to cement that flavour. It was not the best of days - 50 mph winds that were close to blowing us off our feet, and St Sunday Crag is not the place to experience that when the sheer drop into Grisedale is the greatest in the whole of the Lake District.

We left the Patterdale Hotel at 9.10am via the path that goes out of the back of the hotel and takes you to the steep climb of Thornhow End.  We took the path below Birks (LDW-125) and reached St Sunday Crag at 11.25am to seek shelter from the wind behind the cairn.  John, G0TDM was the first of fifteen stations logged, including Geoff G6MZX/P who was on SOTA NP-029 Sharp Haw just north of Skipton.
We had lunch and made for Deepdale Hause, this was when the wind really got scary and Judy decided she had had enough.  Once we dropped down towards Grisedale Tarn she headed back to Patterdale via the lower path and Ruthwaite Lodge. I decided to continue to Seat Sandal LDW-069 and activate that.  I used the path not shown on the OS map that follows a contour line around 50m above the Tarn.
After Seat Sandal the plan was to climb up to Fairfield from Hause Gap. This avoided Cofa Pike, which had some snow on it and in the strong winds was dangerous.  The top of LDW-069 Seat Sandal was reached just after 2.00pm and nine contacts were completed before I returned back to Hause Gap to start the hard loose climb up to LDW-013 Fairfield (3.00pm-3.45pm). Twenty contacts using the rucksack special vertical antenna resulted and the Yaesu VX-170 handheld.
I hadn't contemplated WOTA before doing this walk so I simply passed across the tops of Hart Crag LDW-027 and Hartsop above How LDW-137 on my way back to Patterdale to complete this popular circuit.  I reached the Patterdale Hotel at 6.15pm quite tired after a long day.  I did activate the two missed summits later in the year when I revisited this walk (less Seat Sandal) on a better day with other members of Ryedale Walking Group (See Walk 8).