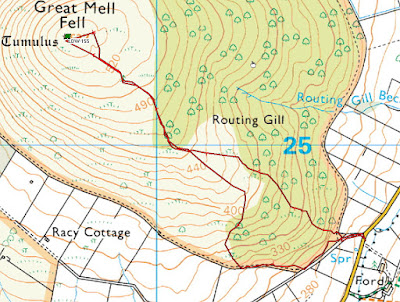 After the activation of several Wainwrights including neighbouring Little Mell Fell in March, I did not get a chance to return to Lakeland until August, which was around the time I became seriously interested in reading Alfred Wainwright's Pictorial Guides.  The chance to spend an hour or two on operating from one of the of easier fells close to the Motorway came about as I was travelling back from climbing and activating Ailsa Craig off the Scottish Coast for SOTA. That trip is another story but on my return journey home I pulled off the M6 at Penrith and drove to Brownrigg Farm NY 407246 where I parked up to climb Great Mell Fell, known locally as "Big Pudding Basin Hill".  In AW's day this area was off limits as it was used by the "War Department" (now Ministry of Defence) as a rifle range.
I set off up the track from the farm and climbed a stile on my right after about 100m, this took me up through the woodland, the shortest route to the top, but a route I would not choose again as it was harder work than it looked on the map.  My route down on the proper footpath was not much further and was quite pleasant. The grassy top of the fell affords great views to Blencathra and Skiddaw: 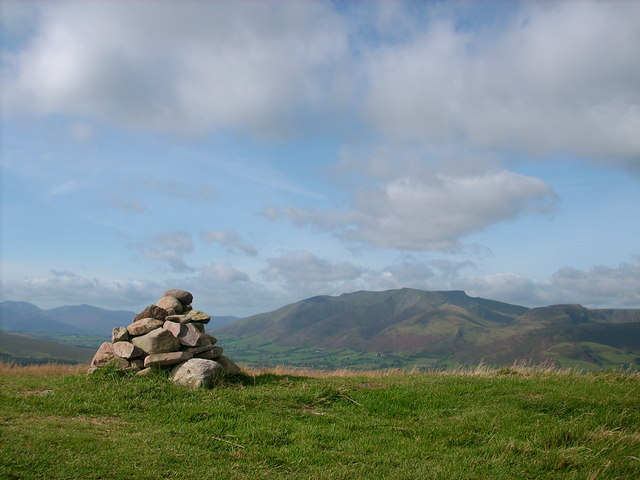 
I set up my station a short distance away from the summit cairn in a slight hollow as there was no cover anywhere on the top of the fell. Despite it being mid August the day was grey and the wind cold. I started on the short wave band of 80m sending my CQ call to attract other stations in CW (Morse) and was pleasantly surprised considering it was the middle of the day in August that the conditions were quite good. 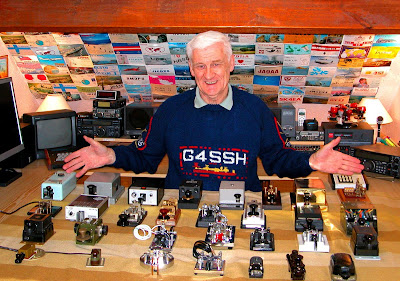 My friend and former work colleague Roy G4SSH in Scarborough, was the first station logged.  Roy is one of the traditional ham radio operators who by choice only use Morse Code to make contacts. This is unsurprising when you know that Roy in earlier years was a Merchant Navy Radio Officer and used this form of communications to contact coastal stations worldwide from large oil tankers. Roy is also a collector of Morse Keys and he can be seen here in his radio shack with his collection of morse keys.

A change to the 60m band and SSB (Voice) brought a contact with Carolyn GW6WRW/P who was on the summit of Mynydd y Lan (GW/SW-024) in South Wales. Great Mell Fell as well as counting as a Wainwright on the Air also counts for the international Summits On The Air scheme too, so there are always many stations eager to make contact.  I finished operations on the 40m band after 35 minutes when the contacts dried up.  The day was dull and I wanted to get back home to North Yorkshire after my trip to Scotland, so I packed up and was on my way down by 1.45pm.
On the way to Scotland earlier in the week I had activated the  two remote northern pennine summits of Burnhope Seat G/NP-003 and Cold Fell G/NP-020. I then drove on to enjoy a short stay with relatives in Newton Stewart who I rarely see. The day before this operation from Great Mell Fell I met up with twelve other ham radio friends from all around the UK in Girvan, where we chartered a boat to take us over to Ailsa Craig. This walk and activation of Great Fell Mell on my own rounded off a successful three day mission.  The Ailsa Craig trip was organised by Tom Read M1EYP.