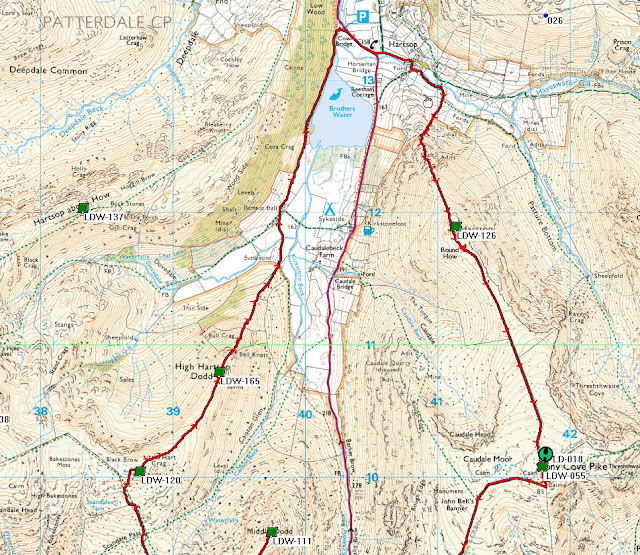 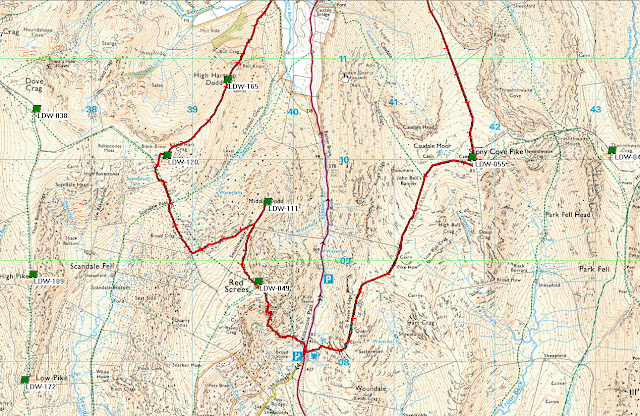 By August I had decided to take the Wainwrights on and endeavour to climb all 214 of them. I studied the seven fifth impression pictorial guides (the ones published by Henry Marshall from Kentmere) which had been given to me by my father in law. They were already well used. They may be old but the hills don’t change that much, apart from some of the paths which get moved due to erosion on the more popular climbs.  I concentrated on AWs ridge routes, which meant a fair number of summits could be covered in a single day.   I knew that from September I would have more opportunities to visit the Lake District – I had organised a five day holiday in Patterdale for members of the Ryedale Walking Group, and the walks that I had planned covered several Wainwrights.
An early start on Thursday 27th August had me parked up at the free car park at Cow Bridge near Hartsop and walking by 8.30am. I crossed the river in the village by the footbridge and climbed up alongside a dry stone wall to the false summit.  Brotherswater was soon below me on my right.
LDW-126 Hartsop Dodd was reached at 9.20am and seven stations were logged on 2m FM.  I left the summit at 9.40am and as the fell appeared to be free of sheep I let Treacle off the lead.  She promptly picked up a scent and disappeared from sight down the side of the fell in the direction of Brotherswater.  After a 30 minute search and constant calling there was no sign of her. I was at the point of despair not knowing whether to abandon the operation, call the police, go back down to the village or just sit tight. I went back to the place where I had left my rucksack and she suddenly appeared from below me. Total relief!  We continued on the  path to Stony Cove Pike (Caudale Moor) LDW-055 which was reached at 10.45am. Take off was very good from here with 17 stations being logged. Sue G1OHH was the first heard and logged. I made my way off the summit over John Bell’s Banner and along St Raven’s Edge and soon the Kirkstone Pass Inn came into view.  On the way down I chatted to a teacher keeping her distance whilst observing a group of students on a Duke of Edinburgh Award expedition who had camped out overnight near Thornthwaite Crag. 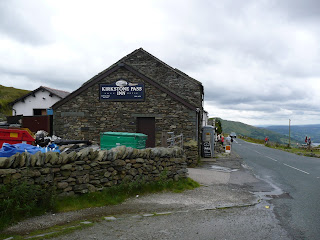 The Kirkstone Pass was reached at 12.15 and I resisted the temptation to call in for a pint, preferring to eat my lunch over the road before I started the climb up to Red Screes LDW-017. The break gave me time to collect my thoughts and make some notes into a voice recorder.  I am a contributor to Walking World and submit walk routes to the website on a fairly regular basis. From the Kirkstone Pass it is quite difficult to pick out the new path up to Red Screes. It certainly is not where the map says it should be. Fix The Fells had obviously put a lot of effect into this one and it made light work of the climb as far as I was concerned, as I reached the summit shelter in mist at 1.00pm.  The best contact out of the eleven was with Peter G1FOA/P, and we worked Summit to Summit. Peter was on Harter Fell (Eskdale) LD-028. I moved off taking 15 minutes to reach the next one - Middle Dodd LDW-111. From here Chris 2E0FSR/P on Ingleborough (SOTA NP-005) was logged. After that I doubled back and made for the wall which runs above Broad Crag.  Little Hart Crag LDW-120 was now above me as I cut across the Scandale Pass.

I climbed up to the summit for the brief activation and then followed the ridge down NNE to High Hartsop Dodd LDW-165, which despite the name is the lowest of the Dodds on this circuit!  Despite screening to the south G1OHH in Lancaster and Doug G1KLZ at Ingleton were easily contacted, as well as the Penrith stations of Geoff G4WHA and John G0TDM.  I made my way carefully down Bell Knott – it is very steep and this brings you to Hartsop Hall and the flat path along the west side of Brotherswater. Cow Bridge was reached at 5.00pm. Considering the time spent looking for my lost dog I was pleased with that, and another six Wainwrights were ticked off the list.  49 contacts had been completed.