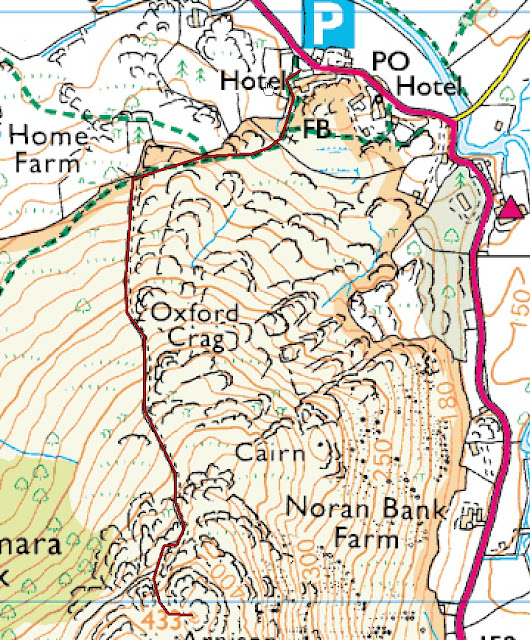 Monday 14th September 2009 and the first day of a five day walking break in and around the Eastern Fells organised by my XYL Judy and myself for 22 members of the Ryedale Walking Group. We based ourselves at The Patterdale Hotel and arrived around lunchtime. I led a short circular walk up to Glenridding Weir and back for the group, and this left me time to nip out of the back of the hotel before dinner to climb and activate the lowest Wainwright in the Eastern Fells group, Arnison Crag LDW-194.  I offered the opportunity to climb the fell to all 22 members of the club, however only one, Graham took up the chance.


A footpath leads from the rear of the hotel to a gate by a stone wall at grid reference 392157. We turned left here to climb up following the stone wall. When we were near the top we left the wall and struck off left to the summit.  I wasn't sure if I would make any contacts on VHF as Arnison Crag is surrounded on three sides and wasn't that high at only 1421 feet.  Despite the lowly height of the fell a great view down Ullswater is afforded.


When I called CQ I was surprised to hear the callsign of Sue G1OHH in Lancaster coming over the top of the Kirkstone Pass which was actually above me! This was followed by contacts with Geoff G4WHA and John G0TDM in Penrith, no surprise there.  We returned back to the hotel with the whole walk and activation taking little more than an hour. The Yaesu VX-170 2m handheld was used with the half wave rucksack special external antenna, the performance of which is far superior to any helical or short vertical.
The next day I was leading a group on a circuit taking in Helvellyn and other Wainwrights, something to really look forward to.