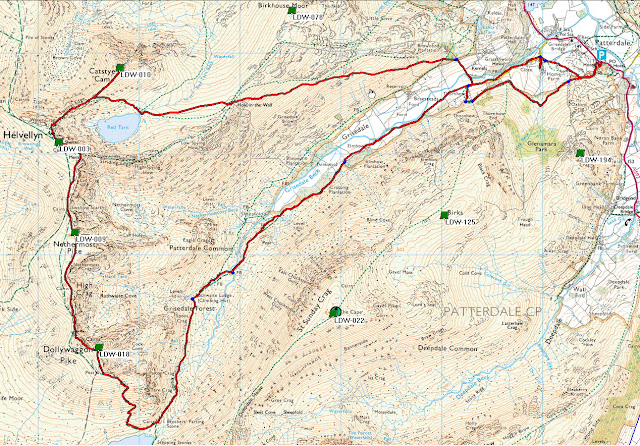 Day two of Ryedale Walking Groups first holiday in Lakeland. I had planned to take the more adventurous members of the group over Helvellyn, whilst Judy my XYL, took the others up Grisedale to the Ruthwaite Lodge Clumbing Hut and then back into Glenridding. This gave some of us a chance to climb Catstycam, Helvellyn, Dollywagon and Nethermost Pikes and for me, to activate them for WOTA. I had decided due to the limited fellwalking experience of some of the group that Swirral Edge would be a safer bet than Striding Edge, and this route lent itself to making the short detour up to Catstycam for those who wanted to climb it. We left the hotel togther via the footpath to the rear and at grid reference 381159 split into two seperate groups. Several of the group did not decide which walk to choose until they reached that point. We made our way up to the Hole in the Wall, and regrouped after refreshments.  We then skirted Red Tarn.

At 345155 those who wanted to accompany me up to Catstycam did so. This is a great little summit, with a very defined peak. It is one of my favourites and is also one of the easiest summits to pick out from other tops in Lakeland as it is so distinctive.
We couldn't hang around too long as we needed to move on over Swirral Edge and make Helvellyn for lunchtime and it was now 12.30pm, the climb with the group from Patterdale having taken a full three hours.
Five stations were worked on this first activation of Catstycam LDW-010 for WOTA on VHF 2m FM. These were G0TDM, G4WHA, G4BLH, G1OHH and M0EZP/P for a summit to summit contact. David was on Catbells LDW-189.


We were soon on our way, gingerly going over Swirral Edge which whilst not quite as "hairy" as Striding Edge has still claimed several lives. Everyone came over in safety despite inexperience and age - a couple of members being around the 70 mark. We arrived at the cross shelter on the summit of Helvellyn LDW-003 for our packed lunches within an hour of leaving Catstycam. There was space for us in the shelter, although it is always busy around lunchtime on Helvellyn. The sheep that live up there in the summer have a liking for banana skins, as can be seen from this picture of club member Dorothy feeding one. 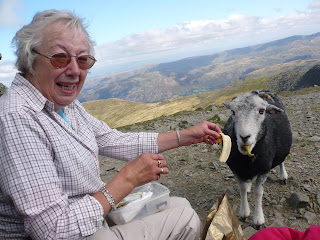 We moved off taking the left hand path over Nethermost Pike, High Crag and Dollywagon Pike, going to the edge of The Tongue to look down into it, the best place to take in the view down to the Ruthwaite Lodge Climbing Hut. I made as many contacts as I could within the time available, before we made our way down the newly created zig zag path down to Grisedale Tarn. It was then just a steady walk back down to Patterdale for the tired group. We passed the barn on the way where Wainwright had slept on his exploration of the Eastern Fells. This was featured on the documentary he made with Eric Robson in the 1980s and revisited by Julia Bradbury on the more recent Coast to Coast series on BBC TV.

Several of the group were thrilled to have climbed the third highest summit in Lakeland and it gave me a sense of satisfaction to have helped them achieve it.

The next day was to be an easy one. A boat trip across Ullswater on the steamer to Howtown, the climb up to Hallin Fell LDW-203, and then a walk back along the eastern side of Ullswater to Patterdale.