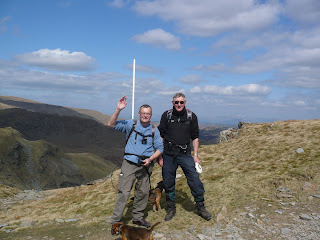 The Kentmere Round horseshoe as seen from the Kent Valley
(Shipman Knotts LDW-133 was also completed)
Image produced under ccl from http://www.stridingedge.net/ 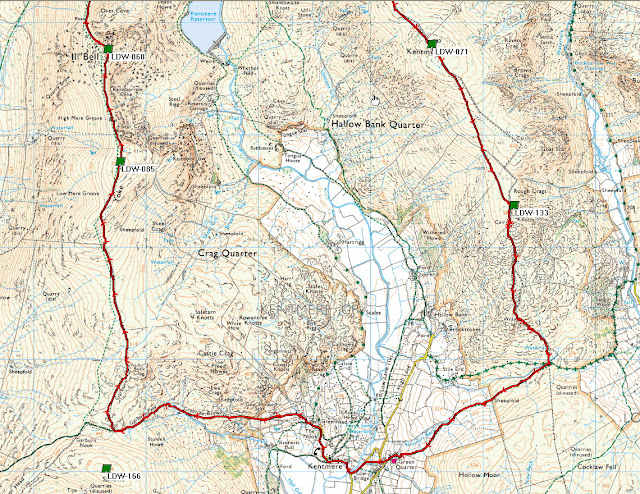 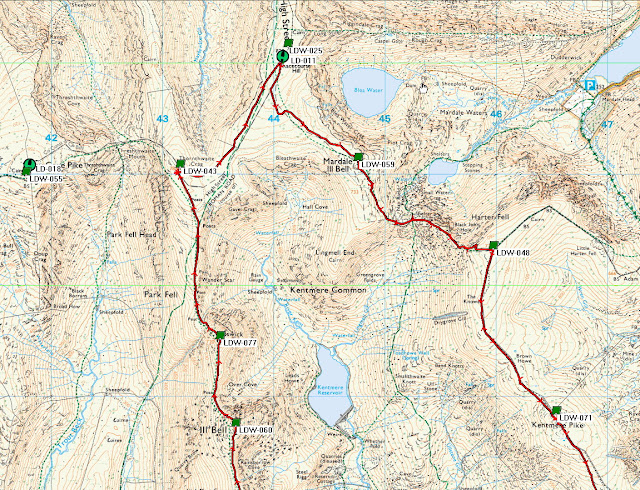 Having walked all the surrounding Wainwright summits and viewed the Kentmere Round from all angles and "talked the talk" with Geoff about doing it, now was the time to "walk the walk" and actually do it.  We parked at Kentmere Church, by the village hall. There is room for around five cars here at grid reference NY 456041. We were walking at 8.55am local time (0755z), and noted that there were another two parking spaces on a small piece of waste ground around the corner at 456043.  The parking field at 458039 was closed off. I got the impression the field gate is opened by the farmer when it is financially worthwhile on Bank Holidays or on busy summer's days to cope with the number of walkers wanting to walk from Kentmere. The weather was perfect for walking, fairly good visibility, mostly in full sun, with little wind and with the ground very dry underfoot for the most part. 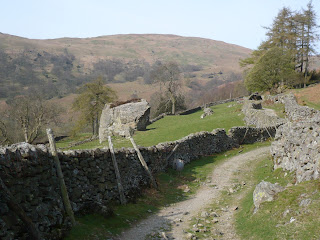 The Badger Rock - actually bigger than it looks in the picture
We were soon passing the massive boulder known as the Badger Rock, which rock climbers use for practice.  The tarmac lane finished and we were now on the Garburn Pass, a rough track unsuitable for motors and classified as a bridleway. This continues below Sallows (LDW-166) and Sour Howes (LDW-180) through to Troutbeck.  We had used this track for a short distance when activating these two Wainwrights the previous month.  We left the Garburn Track to follow an indistinct path north by the stone wall from 437043 reaching the summit of Yoke LDW-085 at 0923z. 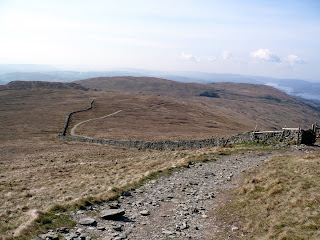 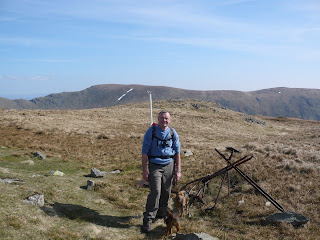 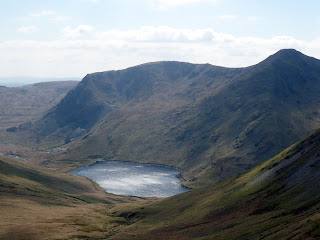 Kentmere Reservoir with Yoke and Ill Bell behind
The first CQ call of many during the day brought Sue G1OHH in Lancaster into the log, followed by six more stations. The top of Yoke had the usual cairn piled on the highest lump of rock but also some old rusty sections of cast iron fencing set into concrete, which can be seen in this picture.  A short descent and another rise took us to Ill Bell LDW-060, the most distinctive and the highest of these three closely spaced Wainwrights. This one featured three cairns.  The next col was steeper and we lost 350' of the height already gained getting down to the col which led us on to Froswick LDW-077.  The VHF conditions were not good here to the north and north east due to the presence of the High Street range above us, so only five stations made it into my log.We were ahead of time now and marching towards Thornthwaite Crag LDW-043 with its 14 feet high beacon, a summit I visited last September when I worked the same stations as I worked today. The summit was busy with a walking group of around twelve people, several pairs and singleton walkers, and a couple of fell runners thrown in for good measure. 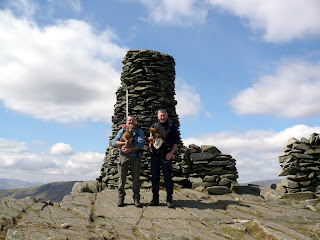 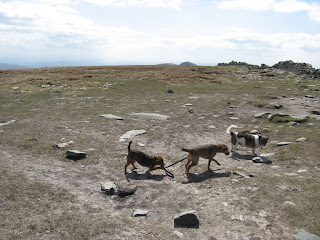 Phil & Geoff on Thornthwaite Crags and Pip and Treacle with unknown dog playing tug of war on High Street
We then headed off for the only SOTA (LD-011) of the day - High Street LDW-025. An easy 8 pointer for SOTA so it was well worthwhile doing this one again in 2010 for the points.  Again, the summit was busy with several walkers asking what I was doing with the radio. There were other dogs about as this picture shows. My terrier Treacle does not have much discipline so I have to keep her tied up whilst activating on the radio. The picture above shows Geoff's terrier Pip trying to pull her back on the lead when Treacle took a fancy to another dog that was passing us by. Maybe he was getting jealous, or just trying to instill some of the discipline that he possesses despite being much younger! It was on High Street where Sue G1OHH alerted me that a summit to summit (S2S) contact was available - a real bonus. I soon found Rick G0VMW/P, who was on Great Mell Fell LDW-155 and we worked again once I arrived at Mardale Ill Bell LDW-059 around half an hour later to give Rick two WOTA S2S contacts.   The sun was right for some good photos of Small Water and Haweswater and we also got a good view of the still snow capped North Pennines  in the direction of Cross Fell. There was still a little snow here and there in the hollows around where we were stood. I think it is safe to say that the North Pennines tops had more snow this winter than the Lakes did. I was speaking to a walker last month who lives in Kirkland, the nearest village to Cross Fell who had experienced snow outside his back door for 14 weeks continuously over what he called our "proper winter". 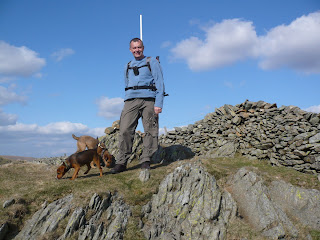 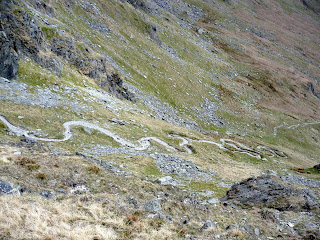 The winding path of the Nan Bield Pass                                         Phil G4OBK on Shipman Knotts LDW-133
After leaving LDW-059 to head for Harter Fell I was on new territory - we climbed down towards the path crossroads at the Nan Bield Pass, losing 500 feet - note the picture showing how the footpath snakes up the hill from Kentmere Reservoir to the shelter above Small Water.  We now had to claw back the 500 feet lost getting down to the col and this we did, and very enjoyable it was too, reaching the top of Harter Fell LDW-048, our 7th Wainwright of the day at 1350z.  A fence runs across the top of the fell and we followed this down to Kentmere Pike LDW-071 where 13 contacts were made including one with GW8NZM/P on the SOTA summit of NW-054 Penycloddiau.  Our final port of call, often missed out of the Kentmere Horseshoe, was the lower summit of Shipman Knotts LDW-133 at 1926'.  This Wainwright (like Froswick) is obscured to the north, this time by the Wainwrights of Branstree and Selside which are 400 feet higher and only 2.5 miles distant, so again communications with Penrith were marginal.
We scrambled down from the top with great care, the most dangerous time is towards the end of a walk as hard as this one. Our old creaky knees were getting sore and the body was feeling tired and tender. Some Kendal Mint Cake helped to give us a boost.  The path was well worn coming from the south which suggests many people go up to Shipman Knotts and then return the same way.  We followed the wall down to 476049 where we crossed the byway, turning left through the five barred gate and then right and right again through another gate to take the path below Hollow Moor where we had been observing a paraglider all the way from Shipman Knotts. He was a master of the art.
Almost 90 minutes after leaving Shipman Knotts we reached Kentmere Church, tired but satisfied after a fantastic walk and 75 contacts for Wainwrights On The Air. We drove back to Staveley to finish the day in true Wainwright fashion by feasting on fish and chips from Staveley Chippy, exactly what the great maestro would have done himself after such a challenging walk. 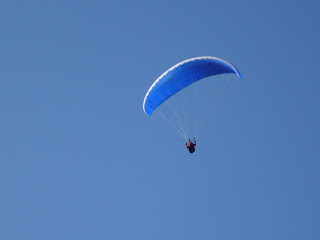 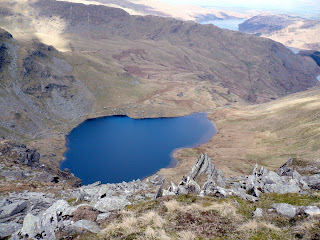 Thank you to the faithful WOTA chasers who made the day enjoyable and the internet spotters (you know who you are). I am glad that several of them were worked on all 9 Wainwrights. Also to my friend Geoff who accompanied me on the walk and to Julian G4ILO for coming up with the WOTA Scheme.

We will tackle several Wainwrights and SOTA summits as part of the Coast to Coast walk in May and in particular Angletarn Pikes LDW-143 which will be my last Far Eastern Fell.  I am also a participant in the "Wainwright Best Of The Rest Challenge" and on 2nd May with Judy and Geoff we are to complete walk HF31 from Wainwrights "Walks on the Howgill Fells" book. Not by coincidence this walk crosses Baugh Fell / Tarn Rigg Hill, the SOTA summit of G/NP-012 which I will activate on HF short wave in morse and voice including the 60m band. I'm really looking forward to doing that walk in May as a fundraiser for the "Fix the Fells Fund". Although this isn't one of the 214 Fells I will blog the walk on here.
73 and Good DX,
Phil