An extra walk in the Howgill Fells - Baugh Fell West

In May 2010 The Wainwright Society organised a challenge known as:
"The Best of the Rest" 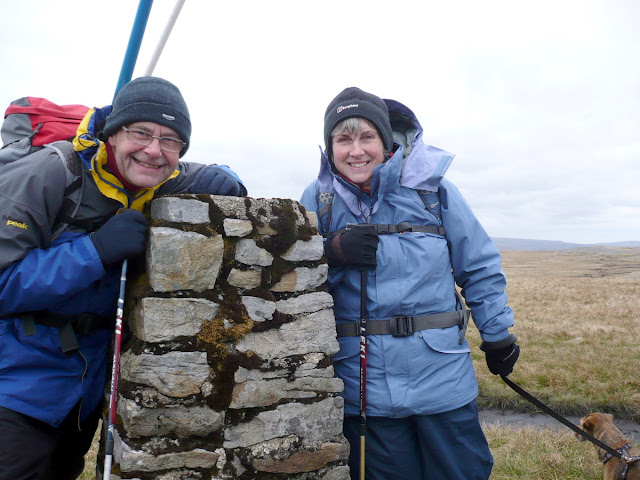 On Knoutberry Haw - part of Baugh Fell
Map
In early 2010 members of The Wainwright Society were given the opportunity on a "first come first served basis" to pick out one from a list of 125 Wainwright's Walks taken from either The Outlying Fells, Walk in Limestone Country or the Walks on the Howgill Fells books.  The objective being enjoyment of a classic walk and a way of raising funds for the "Fix The Fells" charity.  I decided to register my interest quite late in the day so my choice was restricted to the thirty walks remaining.  I wanted to tackle a walk that included one of the Northern Pennine Summits which I hadn't yet climbed, and also one which I hadn't operated my amateur radio equipment from for the Summits On The Air scheme (SOTA).  After some scrutiny of the remaining fell walks I found one. The walk was No.31 in Wainwright's Walks on the Howgill Fells and adjoining fells book, which included  the 12th highest fell in the Northern Pennines at 2224 feet high - Baugh Fell, which is also known as Tarn Rigg Hill by some.
My wife Judy and friend Geoff (also a member of The Wainwright Society) were keen to undertake this walk with me, as were the two terriers Treacle and Pip, despite me telling them all that I would need to spend around 2 hours on the summit making contacts with other stations around Europe using Morse Code. This style of operation differs from the radio activations from Wainwright summits in the Lake District under the WOTA scheme, when simple VHF equipment is used for speed and to maintain a low profile as well.
A look at the Geograph Website showed that indeed there was some shelter near the trig point of Knoutberry Haw which lies on the western side of the extended summit top, and which AW's walk visited, so this walk was considered appropriate.
We left Pickering at 8.30am, a more civilised time that our usual departure time for the Lake District, which is normally 6.00am. We even enjoyed the luxury of a coffee stop at a cafe in Aysgarth before proceeding to our intended destination at the far end of Garsdale via the A684.
So, armed with our OS OL19 map and a copy of the walk taken from Wainwright's book we left the car park at SD 684912 at 11.15am and headed for the farm known as Garsdale Foot, via Danny Bridge (pictured): 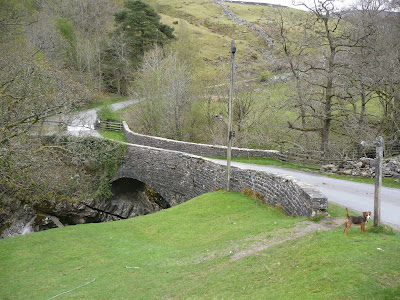 We left the tarmac and took to the open access land of the moor at Garsdale Foot.  Navigation was easy up to the fell top as we followed a watercourse known as Ringing Keld Gutter (below) up to Garsdale Pike and then on to Knoutberry Haw which lies well within the SOTA activation zone. 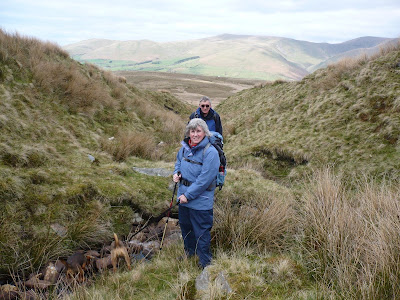 This was a gradual gradient of 3 miles which was not taxing. Wainwright was correct (as he always is) when he described it as tedious and uninteresting, however he did not have the radio interest that that I had, to operate from a Marilyn summit which is rarely visited.  We were on Knoutberry Haw just before 1.00pm and saw no other walkers up to this time, despite this being on the Sunday of the May Day Bank Holiday Weekend, in fine weather.
I was monitoring the VHF 2 metre band on the way up to the summit and before we reached the top had enjoyed contacts with similar equipped stations on three summits in the Lake District. The first was Nick - station G0HIK/P who was on Whitbarrow Fell, Alastair M0VKW/P who was on Helvellyn and Geoff G4WHA/P who was on Wether Hill, one of the Wainwrights I had bagged six weeks previously.  This was turning into a very successful operation which hadn't yet begun as I hadn't reached the summit. The walk coincided with the annual International Summits On The Air weekend when fellwalkers throughout Europe and the USA were going out climbing hills with the intention of making contacts with others on summits and home based stations. After several more contacts on VHF I  strung out my 132 feet long wire aerial, which was supported by a 20 feet high fishing pole.  In the course of 45 minutes on the short wave bands I made contacts with stations in 13 european countries:
England, Belgium, Germany, Luxembourg, Hungary, Switzerland, Croatia, Sweden, Austria, Holland, Italy, Wales and Scotland.
Most of these contacts were made using Morse (CW) and several were "summit to summit" contacts.  Whilst on the summit we were visited by three other walkers, who as usual were curious to find out what I was up to. I relied on my two companions to tell them as I continued making contacts as fast as I could, finishing with 47 stations in my log. We experienced a few minor hail showers on the summit but these came to nothing and the stone walls helped to keep us sheltered from the nithering northerly wind.
The view from the top to the Howgill Fells was superb with a clear view north to Sedbergh and above the town we saw Winder, Arant Haw, The Calf and from this direction the very defined peak  of Yarlside, places which Judy and I had visited in March on our way home from a week bagging Wainwrights in Lakeland. To the south we saw Aye Gill Pike (Rise Hill), Great Coum and Calf Top. These are hills that we will tackle later in 2010 for SOTA.
We left the hilltop at 2.45pm to make our way over to the now disused Baugh Fell Quarry, mentioned in Wainwright's book. We came across an old quarryman's shelter here (pictured): 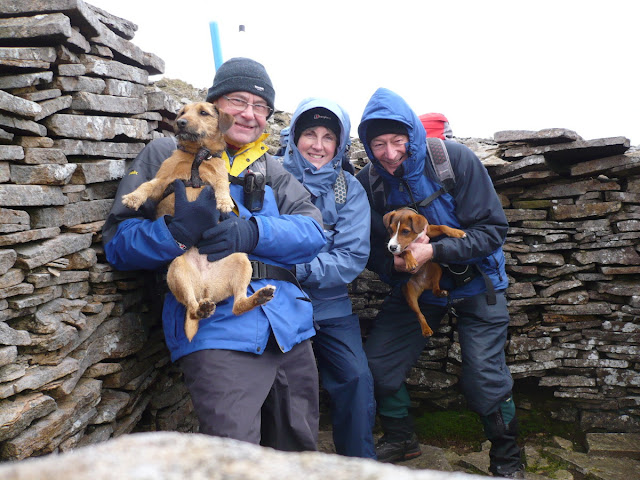 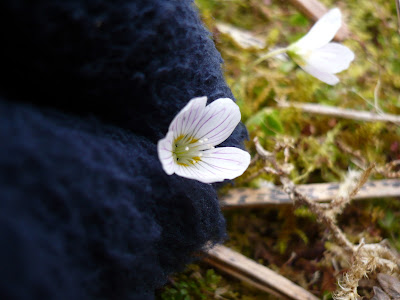 It was early May and we were amazed to find the moor still virtually dead owing to the proper winter that we had endured this year, no grass or greening up yet whatsoever. I expect the snow had been covering up the area for at least 14 weeks between December through to March.  The only thing that had come to life at around the 1000 feet level was a small area of wild flowers (pictured right):

Around this point we noted grazing sheep, the only living animals we saw all day apart from a few meadow pippits and skylarks seen on the barren moor.
Our route took us along the top of Near Gill. As we dropped down we found the sheepfold below us in in the gill which is referred to in Wainwright's book. This is still in fairly good condition. The Howgills (below) can also be seen in the background beyond the sheepfold: 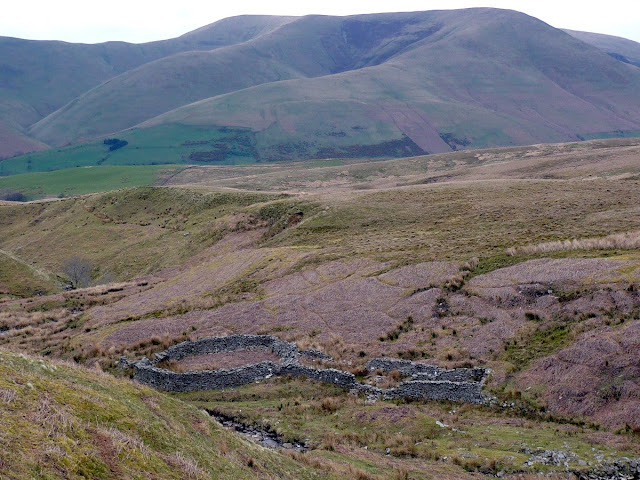 We were now supposed to be on a bridleway, however there was no sign of this until we reached a point at SD 695925 where we joined the footpath near to the farmstead of Fellgate: 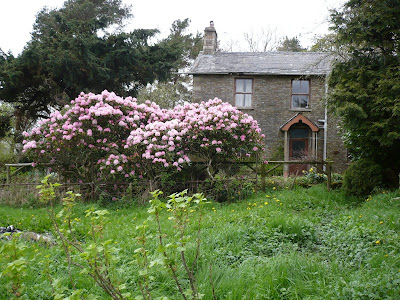 The beautiful colour of the rhodedendron in the garden of Fellgate being in sharp contrast to the dullness of the last five miles of moorland on which we had walked. 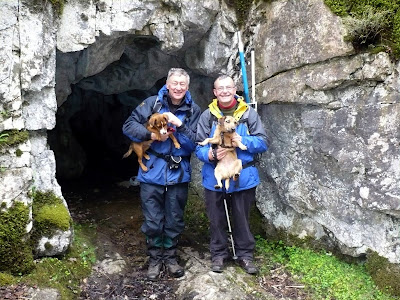 After circumnavigating Dovecote Gill we ended up back at Garsdale Foot, chatting to a farmer tending his sheep. We asked him if he knew how far downstream Tom Croft's Cave (right) was from Danny Bridge. He wasn't aware of this cave mentioned in Wainwrights Walks on the Howgill Fells, so we set off to find it, comforted in the knowledge that the cave was shown on the OL19 map. We found the cave, on the bank of the River Clough, a tributary of the River Rawthey, pictured right:
I was more impressed with the limestone strata of the exposed rock of the Dent Fault on the banks of the river than I was the cave. Indeed, as a waymark indicated, the path running by the stream was part of the two mile long Sedgwick Geological Trail - named after Adam Sedgwick, the village of Dent's most famous son, and an accomplished Geologist of his day who passed away in 1873. 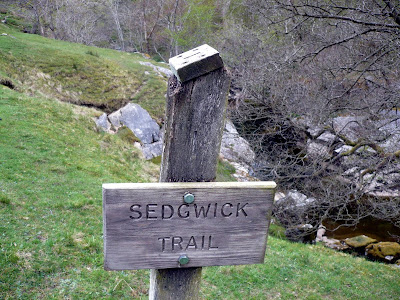 We made our way straight back up amongst the gorse to the car park, an area which when the book was written, was a rubbish dump, but now looking natural and proper. It was now 5.20pm and we made our way back to North Yorkshire, stopping off for a pub meal and a drink in Thirsk en-route, celebrating our contribution to "Best of the Rest Challenge" 2010.
Posted by Phil G4OBK at 23:59